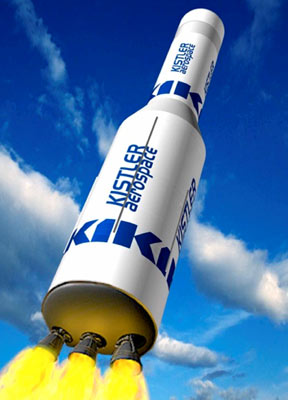 Kistlers K-1 was to be the first completly reusable orbital launcher. The first stage (LAP) propulsion consisted of 2 AJ26-58 and one AJ26-59 engines (Kerosene / LOX), which are Russian NK-33 engines built for the N-1F project, refurbished an upgraded by Aerojet. After stage separation, the middle engine was to reignits to put the first stage on a return trajectory. The landing speed was to be reduced by parachutes and airbags. The second stage (OV) featured one AJ26-60 (reworked NK-43) as main propulsion and two Alcohol/LOX OMS engines for orbit insertion and deorbiting. After payload deployment, the OMS was to ignite to reenter the second stage, which also was to make a parachute and airbag assisted landing.

In 2006 Kistler together with partner Andrews Aerospace were select by NASA to provide three flights to develop a supply capability for the ISS. Initial flights were to be conducted from Woomera.

The NASA contract was cancelled in 200x and therefore no flights are planned.