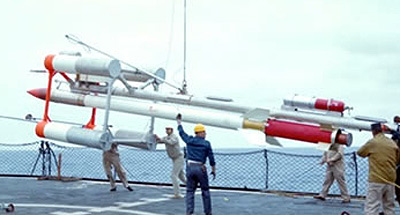 The Hydra Sandhawk was an experimental sounding rocket launched under water from a floating launch structure. It combined a NOTS-401 solid rocket motor as first stage with the motor of the Sandhawk rocket as an upper stage.

The Hydra Sandhawk together with its floating rail launcher was put into the ocean, with nearly the complete rocket under water. The signal to launch was given from the mother ship, but launch only occured, when the launchers gyros pitch rate and position data indicated, that the rocket and launcher were positioned properly in both axes.

Only one single stage test flight and two successul flights of the complete rocket were conducted, two from the USS Norton Sound (AVM-1) and one from the USNS Wheeling (T-AGM-8).