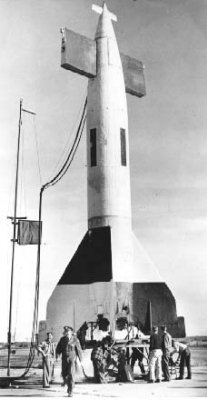 The Hermes-B1 launch vehicle was a modified German A-4 (V-2) missile for experiments in the Hermes-2 ram-jet program.

The first five Hermes-B1 missiles, numbered 0 through 4, were intended to feature aerodynamic replicas of the ramjets and other aerodynamic surfaces and did not have separating second stages, while missiles 5-9 were to have "live," free-flying Ram stages with guidance. Only four vehicles were launched - one of these diverted off course and impacted in Mexico. No vehicles with free flying or even powered Ram stages were ever launched, and the project terminated in 1954.