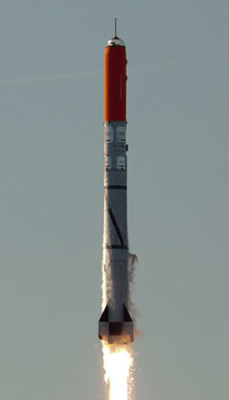 HEAT-1X is a rocket and spacecraft project which was being built by the Danish organization Copenhagen Suborbitals to perform the first amateur crewed spaceflight.

The project consist of the hybrid fueled rocket called HEAT-1X and the 300 kg spacecraft Tycho Brahe. The rocket uses liquid oxygen and polyurethane as fuel. The combination is being launched from a floating platform called Sputnik.

The HEAT-1X rocket is used for a short atmospheric test flight to a height of about 16 km, while the later HEAT-1 will carry the capsule to the border of space with an apogee above 100 km. The maiden flight reached an apogee of only 3 km, but was considered successful.