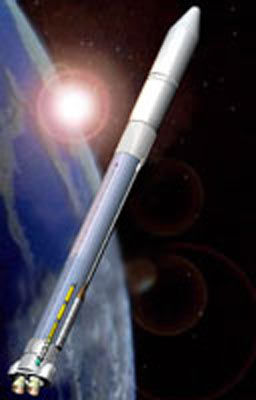 GX (Galaxy Express) was a NASDA sponsored project to replace the J-1 launcher, which has been proved to be too expensive. The GX rocket was be developed by an industry joint venture named Galaxy Express, consisting of Ishikawajima-Harima Heavy Industries (IHI) and Mitsubishi Heavy Industries. The first stage was consist of an Atlas-3 body with a russian RD-180 engine (Kerosene / LOX). The second stage was to feature a new developed liquid fuel engine (Liquid Natural Gas / LOX).

Later the Atlas-3 stage was replace by an Atlas-5 first stage, before the project was cancelled.