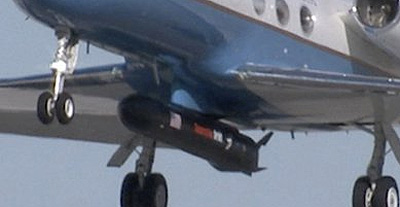 The GOLauncher rockets are based on hybrid rocket motors using a Paraffin / Liquid Oxygen fuel combination. The motors are under development by SPG (Space Propulsion Group).

GOLauncher-1 is a suborbital launch system consisting of a Gulfstream III carrier aircraft and a single stage oxygen-kerosene-fueled rocket. It will be capable to launch payloads up to 90 kg. The propulsion of GOLauncher-1 was originally to be developed by Ventions. In 2018 it was announced, that it used the Hadley engine by Ursa Major Technologies.

A first captive carry test was conducted in late 2017. A first flight is planned for late 2019. In October 2018, the GOLauncher-1 received the USAF designation X-60A for hypersonic flight research.

The GOLauncher-2 orbital launch system consists of a Gulfstream III carrier aircraft and a two stage hybrid-fueled rocket. It will be capable to launch a payload up to 45 kg to an orbit of up to 740 km. The second stage, based on GOLauncher-1, is to be developed by Ventions.

NASA has contracted in October 2013 with Generation Orbit for a launch of three 3U cubesats. The NASA requirement under NEXT got rolled into VCLS as the payload size got larger and outside the capability of GOLauncher 2 to effectively complete the mission.