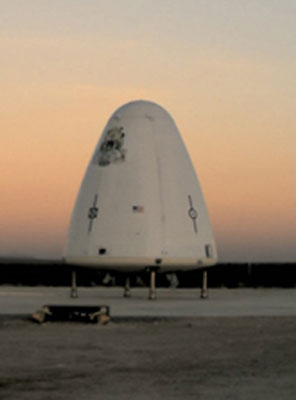 The Goddard experimental vehicle is a precursor to Blue Origins suborbital New Shepard vertical take-off, vertical-landing vehicle designed to take a small number of astronauts on a sub-orbital journey into space. Goddard seems to be comparable to NASAs DC-X prototype.

No technical details are currently known. Goddard was powered by nine engines, which used probably monopropellant Hydrogenperoxide (H2O2) as fuel.

The first flight in November 2006 reached a hight of about 100 m, followed by a soft landing on the concrete launch pad. Later flights expanded the flight envelope.