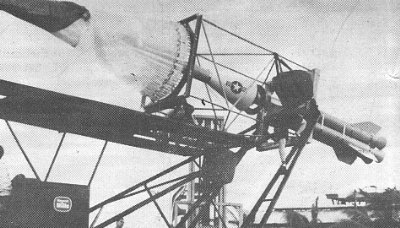 Farside Rocket being loaded into the balloon

The launches carried instrumentation provided by the University of Maryland and Aeronutronics in Glendale. I consisted of a Geiger Counter and Magnetometer, primarily designed to confirm the Van Allen Belt.

Ten Farside rockets were built, but only six launch attempts were made, with only the last two being successful. Earlier attempts failed due to insufficient Helium load of the balloon, which caused the vehicle to be dropped into the sea in the first launch or one or more rocket stages failed to ignite during next three launches in early October. During the two last flights the vehicles were successful, but the payload malfunctioned.