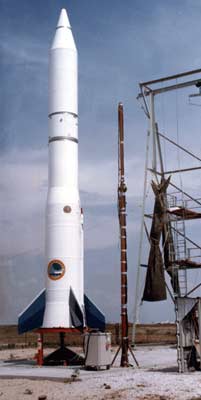 After the failure to develop the liquid-fueled Percheron launch vehicle, Space Service Inc. (SSI) switched under the pressure of NASA to a solid fueled launcher, the Conestoga-1. It was based on the Aries sounding rocket, which was the second stage of the Minuteman ICBM, the M-56 motor. In the final orbital version, this motor would have been topped by two small solid fueled motors, creating a launch capability of some 100 kg to low earth orbit.

Only a single stage version with dummy upper stages was launched from Matagorda Island (Texas) to a height of 313 km to demonstrate the launch capability. As no orders followed, SSI focused on the development on the modular Conestoga-1000 series.