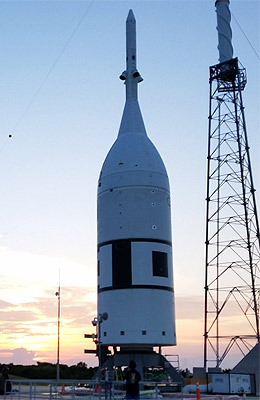 Orbital has been selected by NASA and the U.S. Air Force's Space Development and Test Wing (SDTW) to develop and build the Orion Abort Test Booster (ATB). As part of the Lockheed Martin-led Orion team, Orbital is also designing and producing the Orion Launch Abort System (LAS), which will allow an astronaut crew to safely escape in the event of an emergency during launch pad operations and through the ascent of the Orion vehicle.

The ATB contract was awarded under SDTW's Sounding Rockets Program 2 (SRP-2) contract, which allows the use of surplus government boosters to reduce launch vehicle cost for U.S. Government-sponsored missions. The Orion ATB will be used to simulate aborts at medium and high altitudes under stressful conditions along the Ares I launch vehicle trajectory. Orbital will provide the boosters for these tests. Using flight-proven technologies from the company's Minotaur and Taurus launch vehicles, the ATB will include a reliable surplus first stage (TU-903) from a decommissioned Peacekeeper ICBM. It will also include avionics and associated structures from the Minotaur I to minimize development cost and risk.

The ATB test flights will be the first flights conducted for NASA's Constellation Program. Orbital will design, build and test the ATB at the company's Chandler, Arizona campus, as well as at government test facilities in California and New Mexico. The three-year program includes developmental activities and two planned flights in 2009 and 2010. Contract options could add up to two additional flights and two spare vehicles through 2011. The program was reduced to a single flight, which was delayed to 2019.

The test involves an Orion boilerplate capsule, not a complete Orion. It does not feature a parachute system and will not be recovered. During the flight, it will eject 12 recoverable data recorders.