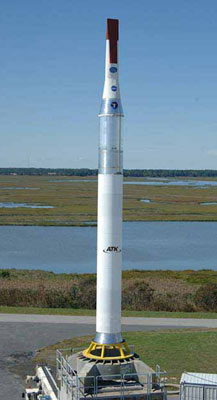 ATK was undergoing a four-phase development process that would have ultimately lead to the development of a family of low-cost, operationally responsive launch vehicles capable of delivering 200 to 750 kg to LEO.

The first phase, ALV X-1, which is already in testing, will be a sounding rocket program launched from Wallops Flight Facility. It consists of an Orion-50SXLG stage of Pegasus / OBV heritage and an thrust vectored Star-37FMV motor as second stage.

The second phase, for which funding has already been secured, will consist of a two-stage, three-axis controlled vehicle capable of reaching suborbital heights of up to 2,000 kilometers. The unfunded third phase will be scaled-up version of the Phase Two vehicle capable of delivering 225 - 350 kg to LEO, while the fourth phase, contingent on government funding, would involve an advanced vehicle based on new technologies.

In 2008 it appeared, that only the protoype would be flown as a demonstrator, but no further flights were planned.