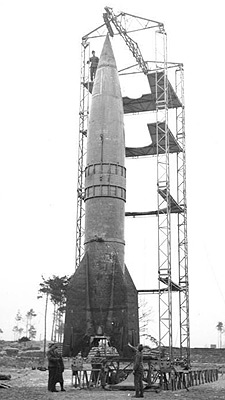 The German A-4 (Aggregat-4) missile, better known under the propaganda name V-2 (Vergeltungswaffe-2) was the world's first large ballistic missile.

The liquid-propellant rocket was developed during the Second World War in Germany to attack Allied cities as a form of retaliation for the ever-increasing Allied bombings against German cities. The A-4 (V-2) rocket was also the first man-made object to leave the atmosphere and reach the borders of space at a height of ~80 km.

The missile was developed at Peenemünde. It used a used a 74% ethanol/water mixture for fuel and liquid oxygen (LOX) for oxidizer. The fuel and oxidizer pumps were driven by a gas generator powered turbine, and the gas was produced by concentrated hydrogen peroxide with sodium permanganate catalyst. Steering was provided by external rudders on the tail fins and jet vanes.

The first successful test flight was on 3 October 1942, reaching an altitude of 84.5 km. The highes altitude reached was 174.6 km on a test launch on 20 June 1944. Test launches were conducted at Peenemünde and later at Blizna and Tuchola Forest. More than 700 test launches were made.

Production of the operational missiles was at Mittelwerk in the Kohnstein where 5200 rockets were built, mainly by forced laborers and concentration camp prisoners. At least 12,000 of these were killed producing the weapons - more than the victims of their military use.

Beginning in September 1944, over 3,000 missiles were launched by the German Wehrmacht against Allied targets during the war, mostly London and later Antwerp.

After the war, surviving missiles were taken by the allies for evaluation. Many of the US missiles were used as sounding rockets A-4 (V-2) US modifications. A few were modified to Bumper and Hermes-B1 experimental rockets. The UK testfired three missiles under Operation Backfire. The USSR flew some captured missiles, but then produced a direct copy, the R-1 (SS-1, Scunner) missile and the derived sientific sounding rocket versions R-1. An improved version was built as R-2 (SS-2, Sibling), also with a sounding rocket derivative R-2A. China eventually produced a copy of the R-2 missile called DF-1.