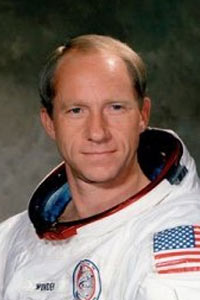 The son of Merrill and Helen Worden, he was born in Jackson, Michigan, on February 7, 1932. Married to Jill Lee Worden (Hotchkiss). Three children. Recreational interests include bowling, water skiing, golf and racquet ball.

Attended Dibble, Griswold, Bloomfield and East Jackson grade schools and completed his secondary education at Jackson High School: Received a bachelor of military science degree from the United States Military Academy at West Point, New York, in 1955 and master of science degrees in Astronautical/Aeronautical Engineering and Instrumentation Engineering from the University of Michigan in 1963. Received honorary doctorate of science in Astronautical Engineering from University of Michigan in 1971.

Prior to his arrival for duty at the Johnson Space Center, he served as an instructor at the Aerospace Research Pilots School-- from which he graduated in September 1965. He is also a February 1965 graduate of the Empire Test Pilots School in Farnborough, England.

He attended Randolph Air Force Base Instrument Pilots Instructor School in 1963 and served as a pilot and armament officer from March 1957 to May 1961 with the 95th Fighter Interceptor Squadron at Andrews Air Force Base, Maryland.

Worden was one of the 19 astronauts selected by NASA in April 1966. He served as a member of the astronaut support crew for the Apollo 9 flight and as backup command module pilot for the Apollo 12 flight.

Worden served as command module pilot for Apollo 15, July 26 - 7 August 1971. His companions on the flight were David R. Scott, spacecraft commander, and James B. Irwin, lunar module commander. Apollo 15 was the fourth crewed lunar landing mission and the first to visit and explore the moon's Hadley Rille and Apennene Mountains which are located on the southeast edge of the Mare Imbrium (Sea of Rains). Apollo 15 achievements include: Largest payloads placed in earth and lunar orbits; first scientific instrument module bay flown and operated on an Apollo spacecraft; longest lunar surface stay time (the lunar module, "Falcon," remained on ground for 66 hours and 54 minutes); longest lunar surface EVA (Scott and Irwin logged 18 hours and 35 minutes each during three excursions onto the lunar surface); longest distance traversed on lunar surface; first use of lunar roving vehicle; first use of a lunar surface navigation device (mounted on Rover-1); first subsatellite (PFS 1) launched in lunar orbit; and first EVA from a command module during transearth coast.

Scott and Irwin collected approximately 171 pounds of lunar surface materials on their three expeditions onto the lunar surface; and Worden logged 38 minutes in extravehicular activity outside the command module, "Endeavour." In completing his three excursions to "Endeavour's" scientific instrument module bay, Worden retrieved film cassettes from the panoramic and mapping cameras and reported his personal observations of the general condition of equipment housed there. Apollo 15 concluded with a Pacific splashdown and subsequent recovery by the USS Okinawa. In completing his space flight, Worden logged 295 hours and 11 minutes in space.

During 1972-1973, Worden was Senior Aerospace Scientist at the NASA Ames Research Center, and from 1973 to 1975, he was chief of the Systems Study Division at Ames.