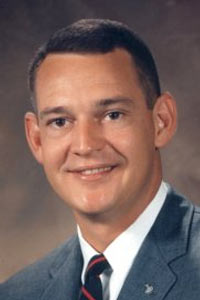 He was test pilot for three years in the Carrier Suitability Branch of the Flight Test Division at Patuxent River. His work there included land based and shipboard tests of the F8E, TF8A, F8E (attack), and A4E and automatic carrier landing system.

Williams was one of the third group of astronauts named by NASA in October 1963. He served as backup pilot for the Gemini 10 mission and worked in the areas of launch operations and crew safety.