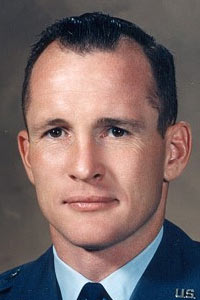 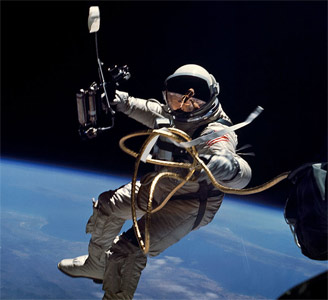 Born in San Antonio, Texas, on 14 November 1930. Died 27 January 1967, at NASA Kennedy Space Center, Florida, in the Apollo spacecraft fire. He is survived by his wife Patricia and their two children.

White, an Air Force Lieutenant Colonel, received flight training in Florida and Texas, following his graduation from West Point. He then spent 3-1/2 years in Germany with a fighter squadron, flying F-86's and F-100's.

He attended the Air Force Test Pilot School at Edwards Air Force Base, California, in 1959.

White was later assigned to Wright-Patterson Air Force Base, Ohio, as an experimental test pilot with the Aeronautical Systems Division. In this assignment he made flight tests for research and weapons systems development, wrote technical engineering reports, and made recommendations for improvement in aircraft design and construction.

He logged more than 3,000 hours flying time, including more than 2,200 hours in jet aircraft.

White was named as a member of the astronaut team selected by NASA in September 1962. He was pilot for Gemini 4, which was a 66-revolution, 4-day mission that began on June 3, and ended on 7 June 1965. During the third revolution, he carried out the first extra vehicular activity in the United States crewed space flight program. He was outside Gemini 4 for 21 minutes, and became the first man to control himself in space during EVA with a maneuvering unit. Other highlights of the mission included cabin depressurization, opening of cabin doors, and 12 scientific and medical experiments. He received the NASA Exceptional Service Medal and the U.S. Air Force Senior Astronaut Wings for this Flight. On 21 March 1966, he was named as one of the pilots of the AS-204 mission, the first 3-man Apollo flight.