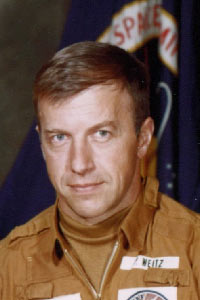 Born in Erie, Pennsylvania, on 25 July 1932. Married to the former Suzanne M. Berry of Harborcreek, Pennsylvania. Two children: Matthew and Cynthia. Hunting and fishing are among his hobbies. His mother, Mrs. Violet Futrell, now resides in Norfolk, Virginia.

Weitz received his commission as an ensign through the NROTC program at Pennsylvania State University. He served for one year at sea aboard a destroyer before going to flight training and was awarded his wings in September 1956. He served in various naval squadrons until he was selected as an astronaut in 1966. He has logged more than 7,700 hours flying time--6,400 hours in jet aircraft.

Mr. Weitz is one of the 19 astronauts selected by NASA in April 1966. He served as pilot on the crew of Skylab-2 (SL-2), which launched on May 25 and ended on 22 June 1973. SL-2 was the first crewed Skylab mission, and activated a 28-day flight. In logging 672 hours and 49 minutes aboard the orbital workshop, the crew established what was then a new world record for a single mission. Mr. Weitz also logged 2 hours and 11 minutes in extravehicular activities.

Mr. Weitz was spacecraft commander on the crew of STS-6, which launched from Kennedy Space Center, Florida, on 4 April 1983. This was the maiden voyage of the Orbiter Challenger. During the mission, the crew conducted numerous experiments in materials processing, recorded lightning activities, deployed IUS/TDRS-A, conducted spectacular extravehicular activity while testing a variety of support systems and equipment in preparation for future space walks, and also carried three "Getaway Specials." Mission duration was 120 hours before landing Challenger on a concrete runway at Edwards Air Force Base, California, on 9 April 1983. With the completion of this flight, Paul Weitz logged a total of 793 hours in space.

Mr. Weitz was Deputy Director of the Johnson Space Center when he retired from NASA service in May 1994.