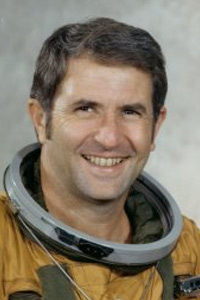 Attended schools in Fayette and Meridian, Mississippi; received a bachelor of aeronautical engineering degree from Georgia Institute of Technology in 1959.

Truly was ordered to flight school and was designated a Naval Aviator on October 7, 1960. His initial tour of duty was in Fighter Squadron 33 where he flew F-8 Crusaders aboard USS Intrepid (CVA-11) and USS Enterprise (CVN-65) and made more than 300 carrier landings. From 1963 to 1965, he was first a student and later an instructor at the U.S. Air Force Aerospace Research Pilot School at Edwards Air Force Base, California. In 1965, he was among the first military astronauts selected to the USAF Manned Orbiting Laboratory (MOL) program in Los Angeles, California.

He became an astronaut for the National Aeronautics and Space Administration in August 1969. He was a member of the Astronaut support crew and capsule communicator for all three of the crewed Skylab missions (1973) and the Apollo-Soyuz mission (1975).

Truly was pilot for one of the two-man crews that flew the 747/Space Shuttle Enterprise approach and landing test flights during 1977. He was then assigned as a backup pilot for STS-1, the first orbital flight test of the Shuttle.

His first flight into space (STS-2, November 12-14, 1981) was as pilot of the Space Shuttle Columbia, significant at the first crewed spacecraft to be reflown in space.

His second flight (STS-8, August 30 to 5 September 1983) was as commander of the Space Shuttle Challenger, which was the first night launch and landing in the Shuttle program. As a Naval Aviator and test pilot, Truly has over 7,000 hours in numerous military jet aircraft.

Truly left NASA in 1983 to become the first commander of the Naval Space Command, Dahlgren, Virginia. He served as NASA Administrator from 1989-1992.