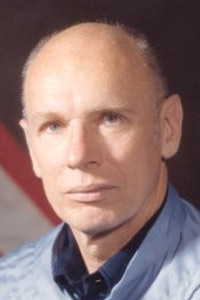 Born in Faison, North Carolina, on 14 April 1929. Married to the former Elizabeth Jennifer Fowler of Hertfordshire, England. They have two sons.

Attended primary and secondary schools in Faison, North Carolina; received a bachelor of science degree in physics and a doctorate in medicine from the University of North Carolina in 1952 and 1963, respectively.

Following graduation from the University of North Carolina and having completed Air Force ROTC training, Thornton served as officer-in-charge of the Instrumentation Lab at the Flight Test Air Proving Ground. He later became a consultant to Air Proving Ground Command.

As chief engineer of the electronics division of the Del Mar Engineering Labs at Los Angeles from 1956 to 1959, he also organized and directed its Avionics Division. He returned to the University of North Carolina Medical School in 1959, graduated in 1963, and completed internship training in 1964 at the Wilford Hall USAF Hospital at Lackland Air Force Base, San Antonio, Texas.

Dr. Thornton returned to active duty with the United States Air Force and was then assigned to the USAF Aerospace Medical Division, Brooks Air Force Base, San Antonio, where he completed the Primary Flight Surgeon's training in 1964. It was during his two-year tour of duty there that he became involved in space medicine research and subsequently applied and was selected for astronaut training. Dr. Thornton developed and designed the first mass measuring devices for space, which remain in use today.

Dr. Thornton has logged over 2,500 hours pilot flying time in jet aircraft, is currently a Clinical Assistant Professor in the Department of Medicine, University of Texas Medical Branch, Galveston, Texas, and is an adjunct Professor at University of Houston, Clear Lake.

Dr. Thornton was a member of the astronaut support crew for the Skylab 2, 3, and 4 missions, and principal investigator for Skylab experiments on mass measurement, anthropometric measurements, hemodynamics, and human fluid shifts and physical conditioning. He first documented the shift and loss of fluid changes in body posture size and shape, including increase in height and the rapid loss of muscle strength and mass in space flight.

As a member of the Astronaut Office Operations Missions Development group, Dr. Thornton was responsible for developing crew procedures and techniques for deployable payloads, and for maintenance of crew conditions in flight. He developed advanced techniques for, and made studies in, kinesiology and kinesimetry related to space operations.

During Space Shuttle operations he continued physiological investigations in the cardiovascular and musculoskeletal and neurological areas. He developed the Shuttle treadmill for in-flight exercise and several other on-board devices. His work concentrated on the space adaptation syndrome, with relevant investigations on STS-4, STS-5, STS-6, STS-7, and STS-8.

Dr. Thornton continued his work in space medicine while awaiting his next flight opportunity. He worked on problems relative to extending mission durations in the Space Shuttle, in Space Station, and in space exploration, and has designed the necessary exercise and other hardware to support such missions. He continued analysis and publication of results from studies of neurological adaptation, and the study of neuromuscular inhibition following flight, osteoporosis in space and on Earth, and postflight orthostasis. He has completed designs for exercise and other countermeasure equipment for the Extended Duration Orbiter (EDO), and for Space Station Freedom, including improved treadmills, rowing machines, isotonic exercise devices, and a bicycle. Much of this is currently scheduled for flight.