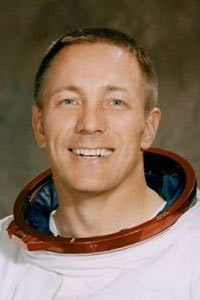 He served with the Air Force from 1953 to 1956 and, upon graduation from the Pilot Training Program and Gunnery School at Nellis Air Force Base, Nevada, was assigned as a fighter pilot in Japan and Korea. After completing his tour of active duty in the military services, he served as a jet fighter pilot with Massachusetts Air National Guard from September 1957 to March 1960 and as a member of the Connecticut Air National Guard from April 1960 to October 1965.

Mr. Swigert was one of the 19 astronauts selected by NASA in April 1966. He served as a member of the astronaut support crew for the Apollo 7 mission.

Mr. Swigert was next assigned to the Apollo 13 backup crew and subsequently called upon to replace prime crewman Thomas K. Mattingly as command module pilot. (The substitution was announced 72 hours prior to launch of the mission following Mattingly's exposure to the German measles.) Apollo 13, April 11-17, 1970, was programmed for ten days and was committed to our first landing in the hilly, upland Fra Mauro region of the moon. However, the original flight plan was modified enroute to the moon due to a failure of the Apollo 13 service module cryogenic oxygen system, which occurred at approximately 55 hours into the flight. Swigert and fellow crewmen, James A. Lovell, spacecraft commander and Fred W. Haise, lunar module pilot, working closely with Houston ground controllers, converted their lunar module "Aquarius" into a effective lifeboat. Their emergency activation and operation of lunar module systems conserved both electrical power and water in sufficient quantity to assure their safety and survival while in space and for the return to earth.

Mr. Swigert took a leave of absence from NASA in April 1973 to become Executive Director of the Committee on Science and Technology, U.S. House of Representatives.

Mr. Swigert resigned from NASA and the committee in August 1977, to enter politics. In 1979 he became Vice President of B.D.M. Corporation, Golden, Colorado. In November 1982 he was elected to the U.S. House of Representatives. He died on 28 December 1982 of bone cancer, before he could be sworn in.