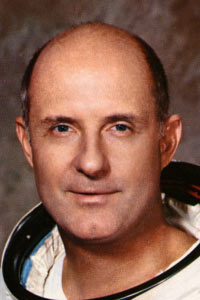 Fellow of the American Astronautical Society, American Institute of Aeronautics and Astronautics, the Society of Experimental Test Pilots, and a member of the Masonic Lodge.

NASA Distinguished Service Medals (2), NASA Exceptional Service Medals (2), Air Force Distinguished Service Medal with 3 Oak Leaf Clusters, Air Force Distinguished Flying Cross with one Oak Leaf Cluster, Air Force Outstanding Unit Award with one Oak Leaf Cluster, Air Force Commendation Medal, Air Force Command Pilot Astronaut Wings. Other awards include the American Institute of Aeronautics and Astronautics (AIAA) Chanute Flight Award, the Veterans of Foreign Wars National Space Award, National Geographic Society's General Thomas D. White USAF Space Trophy, Federation Aeronautique Internationale Gold Space Medal. In 1966, he was co-recipient of the IAAA Award. He was honored with the Harmon International Aviation Trophy in 1966 and 1976. In 1969 he received the National Academy of Television Arts and Sciences Special Trustees Award and in 1978 the Los Angeles Area Chamber of Commerce Kitty Hawk Sands of Time Award; received the Society of Experimental Test Pilots James H. Doolittle Award for Management, September 1979, October 1979, received the NASA Medal for outstanding leadership, one of the Agency's highest awards. In 1993 General Stafford was the eighth recipient of the Congressional Space Medal of Honor. He was inducted into the Astronaut Hall of Fame and received the Rotary National Award for Space Achievement (RNASA). He served as the Chairman of the Operations Oversight Committee of the first Hubble Telescope Spacecraft Servicing and Repair Mission that corrected the design and manufacturing defect of the instrument. In 1994, NASA recognized his tremendous efforts and presented him with the NASA Public Service Award for the Hubble Telescope Service and Repair Mission. General Stafford was inducted into the Oklahoma Commerce and Industry Hall of Honor in October 1994, and to the National Aviation Hall of Fame and the Aerospace Walk of Honor in 1997.

General Stafford graduated with honors in 1952 from the U.S. Naval Academy, Annapolis, Maryland, and was commissioned a second lieutenant in the United States Air Force. He received his pilot wings at Connally AFB, Waco, Texas, in September 1953. He completed advanced interceptor training and was assigned to the 54th Flight Interceptor Squadron, Ellsworth AFB, Rapid City, South Dakota. In December 1955 he was assigned to the 496th Fighter Interceptor Squadron, Hahn Air Base, Germany, where he performed the duties of pilot, flight leader, and flight test maintenance office, flying F-86Ds. He was an instructor in flight test training and specialized academic subjects-establishing basic textbooks and directing the writing of flight test manuals for use by the staff and students. He is co-author of the Pilot's Handbook for Performance Flight Testing and the Aerodynamics Handbook for Performance Flight Testing.

General Stafford was selected among the second group of astronauts in September 1962 by the National Aeronautics and Space Administration (NASA) to participate in Projects Gemini and Apollo. In December 1965, he piloted Gemini VI the first rendezvous in space, and helped develop techniques to prove the basic theory and practicality of space rendezvous. In June 1966 he commanded Gemini IX and performed a demonstration of an early rendezvous that would be used in Apollo, the first optical rendezvous, and a lunar orbit abort rendezvous. From August 1966 to October 1968 he headed the mission planning analysis and software development responsibilities for the astronaut group for Project Apollo.

General Stafford was the lead member of the group, which helped formulate the sequence of missions leading to the first lunar landing mission. He demonstrated and implemented the theory of a pilot manually flying the Saturn booster into orbit and the translunar injection maneuver.

General Stafford was commander of Apollo 10 in May 1969, first flight of the lunar module to the moon, performed the first rendezvous around the Moon, and performed the entire lunar landing mission except the actual landing.

He also made reconnaissance and tracking on future Apollo landing sites. General Stafford was cited in the Guinness Book of World Records for highest speed ever attained by man, that occurred during Apollo 10 reentry when the spacecraft attained 24,791 statute miles per hour.

He was assigned as head of the astronaut group in June 1969, responsible for the selection of flight crews for projects Apollo and Skylab. He reviewed and monitored flight crew training status reports, and was responsible for coordination, scheduling, and control of all activities involving NASA astronauts.

In June 1971, General Stafford was assigned as Deputy Director of Flight Crew Operations at the NASA Manned Space Flight Center. He was responsible for assisting the director in planning and implementation of programs for the astronaut group, the Aircraft Operations, Flight Crew Integration, Flight Crew Procedures, and Crew Simulation and Training Divisions.

He logged his fourth space flight as Apollo commander of the Apollo-Soyuz Test Project (ASTP) mission, July 15-24, 1975, a joint space flight culminating in the historic first meeting in space between American Astronauts and Soviet Cosmonauts.

General Stafford was the first member of his Naval Academy Class of 1952 to pin on the first, second and third stars of a General Officer. He has flown six rendezvous in space; logged 507 hours and 43 minutes in space flight and wore the Air Force command Pilot Astronaut Wings. He has flown over 127 different types of aircraft and helicopters and four different types of spacecraft.

General Stafford assumed command of the Air Force Flight Test Center 4 November 1975. He was promoted to the grade of Major General 9 August 1975, with date of rank of June 1, 1973.

Gen. Stafford was promoted Lt. Gen. on 15 March 1978 and on 1 May 1978 assumed the duties as the Deputy Chief of Staff, Research, Development and Acquisition, HQ USAF, Wash., DC. During this time Gen. Stafford was personally involved in initiating the F-117A Stealth Fighter. In early 1979, he wrote the initial desired specifications on and started the advanced technology bomber development, now designated the B-2 “Stealth Bomber”. Gen. Stafford retired from the Air Force in November 1979.

In June of 1990, Vice President Quayle and Admiral Richard Truly, then NASA Administrator, asked General Stafford to Chair a team to independently advise NASA how to carry out President Bush's vision of returning to the Moon, this time to stay, and then go on to explore Mars. General Stafford assembled teams of 40 full-time and 150 part-time members from the DOD, DOE and NASA, and completed the study called "America at the Threshold", a road map for the next 30 years of the U.S. Manned Space Flight Program. General Stafford and Vice President Quayle held a joint Press Conference at the White House in June 1991 to announce the recommendations to the public. The Clinton Administration directed a review of all federally-funded research and development plans of the Executive Branch in 1994. Gen. Stafford chaired the committee to review and make recommendations to enhance the efficiency of the R&D initiatives of the NASA Human Exploration Enterprise that included JSC, KSC, MSFC and SSFC.

He co-founded the Technical Consulting Firm of Stafford, Burke, and Hecker, Inc. in Alexandria, Virginia. He sits on the Board of Directors of six corporations listed on the New York Stock Exchange, one listed on the American Exchange, and two others, including Seagate Technology, Inc. Seagate Technology is the largest independent hard disk drive maker in the world. He has served as an advisor to a number of governmental agencies including NASA and the Air Force Systems Command. He was a defense advisor to Ronald Reagan during the presidential campaign and a member of the Reagan transition team. He served on the National Research Council's Aeronautics and Space Engineering Board; the Committee on NASA Scientific and Technological Program Reviews and Vice President Quayle's Space Policy Advisory Council. He was Chairman of the NASA Advisory Council Task Force on Shuttle-Mir Rendezvous and Docking Missions, is currently Chairman of the NASA Advisory Council Task Force on ISS Operational Readiness, and Co-Chairman of the Stafford-Covey Space Shuttle Return to Flight Task Group.