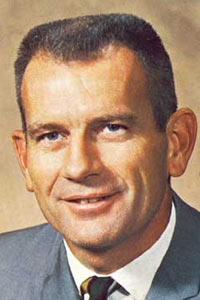 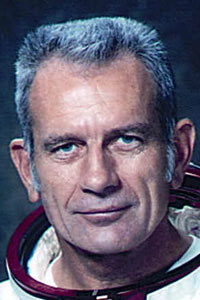 Graduated from Sparta High School; received a bachelor of science degree in Aeronautical Engineering from the University of Minnesota, Minneapolis, Minnesota, in 1949.

Slayton entered the Air Force as an aviation cadet and received his wings in April 1943 after completing flight training at Vernon and Waco, Texas.

As a B-25 pilot with the 340th Bombardment Group, he flew 56 combat missions in Europe. He returned to the United States in mid-1944 as a B-25 instructor pilot at Columbia, South Carolina, and later served with a unit responsible for checking pilot proficiency in the A-26. In April 1945, he was sent to Okinawa with the 319th Bombardment Group and flew seven combat missions over Japan. He served as a B-25 instructor for one year following the end of the war and subsequently left the Air Force to enter the University of Minnesota. He became an aeronautical engineer after graduation and worked for two years with the Boeing Aircraft Corporation at Seattle, Washington, before being recalled to active duty in 1951 with the Minnesota Air National Guard.

Upon reporting for duty, he was assigned as maintenance flight test officer of an F-51 squadron located in Minneapolis, followed by 18-months as a technical inspector at Headquarters Twelfth Air Force, and a similar tour as fighter pilot and maintenance office with the 36th Fighter Day Wing at Bitburg, Germany. Returning to the United States in June 1955, he attended the USAF Test Pilot School at Edwards Air Force Base, California. He was a test pilot there from January 1956 until April 1959 and participated in the testing of fighter aircraft built for the United States Air Force and some foreign countries.

He has logged more than 6,600 hours flying time, including 5,100 hours in jet aircraft.

Mr. Slayton was named as one of the Mercury astronauts in April 1959. He was originally scheduled to pilot the Mercury-Atlas 7 mission but was relieved of this assignment due to a heart condition discovered in August 1959.

Mr. Slayton became Coordinator of Astronaut Activities in September 1962 and was responsible for the operation of the astronaut office. In November 1963, he resigned his commission as an Air Force Major to assume the role of Director of Flight Crew Operations. In this capacity, he was responsible for directing the activities of the astronaut office, the aircraft operations office, the flight crew integration division, the crew training and simulation division, and the crew procedures division. Slayton was restored to full flight status and certified eligible for crewed space flights in March 1972, following a comprehensive review of his medical status by NASA's Director of Life Sciences and the Federal Aviation Agency.

Mr. Slayton made his first space flight as Apollo docking module pilot of the Apollo-Soyuz Test Project (ASTP) mission, July 15-24, 1975–a joint space flight culminating in the first historical meeting in space between American astronauts and Soviet cosmonauts. Completing the United States flight crew for this 9-day earth-orbital mission were Thomas P. Stafford (Apollo commander) and Vance D. Brand (Apollo command module Pilot). In the Soviet spacecraft were cosmonauts Alexey Leonov (Soyuz commander) and Valeriy Kubasov (Soyuz flight engineer). The crewmen of both nations participated in a rendezvous and subsequent docking, with Apollo the active spacecraft. The event marked the successful testing of a universal docking system and signaled a major advance in efforts to pave the way for the conduct of joint experiments and/or the exchange of mutual assistance in future international space explorations. There were 44 hours of docked joint activities during ASTP, highlighted by four crew transfers and the completion of a number of joint scientific experiments and engineering investigations. All major ASTP objectives were accomplished and included: testing a compatible rendezvous system in orbit; testing of androgynous docking assemblies; verifying techniques for crew transfers; and gaining experience in the conduct of joint international flights. Apollo splashed down in the Pacific Ocean near Hawaii and was quickly recovered by the USS New Orleans. Slayton logged 217 hours and 28 minutes in his first space flight.

From December 1975 through November 1977, Slayton served as Manager for Approach and Landing Test Project. He directed the Space Shuttle approach and landing test project through a series of critical orbiter flight tests that allowed in-flight test and checkout of flight controls and orbiter subsystems and permitted extensive evaluations of the orbiter's subsonic flying qualities and performance characteristics.

Slayton retired from NASA in 1982. He was president of Space Services Inc., of Houston, a company he founded to develop rockets for small commercial payloads.

Slayton died on 13 June 1993, in League City, Texas, from complications of a brain tumor.