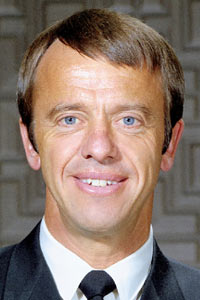 Attended primary and secondary schools in East Derry and Derry, New Hampshire; received a Bachelor of Science degree from the United States Naval Academy in 1944, an Honorary Master of Arts degree from Dartmouth College in 1962, and Honorary Doctorate of Science from Miami University (Oxford, Ohio) in 1971, and an Honorary Doctorate of Humanities from Franklin Pierce College in 1972. Graduated Naval Test Pilot School in 1951; Naval War College, Newport, Rhode Island in 1957.

Fellow of the American Astronautical Society and the Society of Experimental Test Pilots; member of the Rotary, the Kiwanis, the Mayflower Society, the Order of the Cincinnati, and the American Fighter Aces; honorary member, Board of Directors for the Houston School for Deaf Children, Director, National Space Institute, and Director, Los Angeles Ear Research Institute.

Congressional Medal of Honor (Space); Awarded two NASA Distinguished Service Medals, the NASA Exceptional Service Medal, the Navy Astronaut Wings, the Navy Distinguished Service Medal, and the Navy Distinguished Flying Cross; recipient of the Langley Medal (highest award of the Smithsonian Institution) on 5 May 1964, the Lambert Trophy, the Kinchloe Trophy, the Cabot Award, the Collier Trophy, the City of New York Gold Medal (1971), Achievement Award for 1971. Shepard was appointed by the President in July 1971 as a delegate to the 26th United Nations General Assembly and served through the entire assembly which lasted from September to December 1971.

Shepard began his naval career, after graduation from Annapolis, on the destroyer COGSWELL, deployed in the pacific during World War II. He subsequently entered flight training at Corpus Christi, Texas, and Pensacola, Florida, and received his wings in 1947. His next assignment was with Fighter Squadron 42 at Norfolk, Virginia, and Jacksonville, Florida. He served several tours aboard aircraft carriers in the Mediterranean while with this squadron.

In 1950, he attended the United States Navy Test Pilot School at Patuxent River, Maryland. After graduation, he participated in flight test work which included high- altitude tests to obtain data on light at different altitudes and on a variety of air masses over the American continent; and test and development experiments of the Navy's in-flight refueling system, carrier suitability trails of the F2H3 Banshee, and Navy trials of the first angled carrier deck. He was subsequently assigned to Fighter Squadron 193 at Moffett Field, California, a night fighter unit flying Banshee jets. As operations officer of this squadron, he made two tours to the Western pacific onboard the carrier ORISKANY.

He returned to Patuxent for a second tour of duty and engaged in flight testing the F3H Demon, F8U Crusader, F4D Skyray, and F11F Tigercat. He was also project test pilot on the F5D Skylancer, and his last five months at Patuxent were spent as an instructor in the Test Pilot School. He later attended the Naval War College at Newport, Rhode Island, and upon graduating in 1957 was subsequently assigned to the staff of the Commander-in-Chief, Atlantic Fleet, as aircraft readiness officer.

Rear Admiral Shepard was one of the Mercury astronauts named by NASA in April 1959, and he holds the distinction of being the first American to journey into space. On May 5, 1961, in the Freedom 7 spacecraft, he was launched by a Redstone vehicle on a ballistic trajectory suborbital flight--a flight which carried him to an altitude of 116 statute miles and to a landing point 302 statute miles down the Atlantic Missile Range.

In 1963, he was designated Chief of the Astronaut Office with responsibility for monitoring the coordination, scheduling, and control of all activities involving NASA astronauts. This included monitoring the development and implementation of effective training programs to assure the flight readiness of available pilot/non-pilot personnel for assignment to crew positions on crewed space flights; furnishing pilot evaluations applicable to the design, construction, and operations of spacecraft systems and related equipment; and providing qualitative scientific and engineering observations to facilitate overall mission planning, formulation of feasible operational procedures, and selection and conduct of specific experiments for each flight. He was restored to full flight status in May 1969, following corrective surgery for an inner ear disorder.

Rear Admiral Shepard has logged a total of 216 hours and 57 minutes in space, of which 9 hours and 17 minutes were spent in lunar surface EVA.

He resumed his duties as Chief of the Astronaut Office in June 1971 and served in this capacity until he retired from NASA and the Navy on 1 August 1974.

Shepard was in private business in Houston, Texas. He served as the President of the Mercury Seven Foundation, a non-profit organization which provides college science scholarships for deserving students.