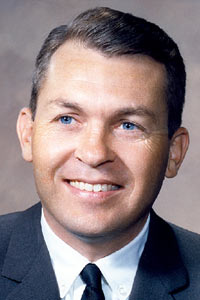 Member of the Society of Experimental Test Pilots; Associate Fellow of the American Institute of Aeronautics and Astronautics.

See was one of nine pilot astronauts selected in September 1962. He participated in all phases of the astronaut training program and was subsequently given responsibility for monitoring the design and development of guidance and navigation systems. He also aided in the coordination for mission planning. He was selected as pilot of the back-up crew for the Gemini 5 mission, and the command pilot for the Gemini 9 flight.