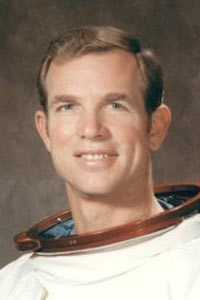 He was assigned to the 32d Tactical Fighter squadron at Soesterberg Air Base (RNAF), Netherlands, from April 1956 to July 1960. Upon completing this tour of duty, he returned to he United States for study at the Massachusetts Institute of Technology.

He retired from the Air Force in March 1975 with the rank of Colonel and over 5600 hours of flying time.

Scott was one of the third group of astronauts named by NASA in October 1963.

On 16 March 1966, he and command pilot Neil Armstrong were launched into space on the Gemini 8 mission--a flight originally scheduled to last three days but terminated early due to a malfunctioning thruster. The crew performed the first successful docking of two vehicles in space and demonstrated great piloting skill in overcoming the thruster problem and bringing the spacecraft to a safe landing.

Scott served as command module pilot for Apollo 9, March 3-13, 1969. This was the third crewed flight in the Apollo series, the second to be launched by a Saturn V, and the first to complete a comprehensive earth-orbital qualification and verification test of a "fully configured Apollo spacecraft." The ten-day flight provided vital information previously not available on the operational performance, stability, and reliability of lunar module propulsion and life support systems. Highlight of this evaluation was completion of a critical lunar-orbit rendezvous simulation and subsequent docking, initiated by James McDivitt and Russell Schweickart from within the lunar module at a separation distance which exceeded 100 miles from the command/service module piloted by Scott. The crew also demonstrated and confirmed the operational feasibility of crew transfer and extravehicular activity techniques and equipment, with Schweickart completing a 46-minute EVA outside the lunar module. During this period, Dave Scott completed a 1-hour stand-up EVA in the open command module hatch photographing Schweickart's activities and also retrieving thermal samples from the command module exterior. Apollo 9 splashed down less than four miles from the helicopter carrier USS Guadalcanal.

In his next assignment, Scott was designated backup spacecraft commander for Apollo 12.

He made his third space flight as spacecraft commander of Apollo 15, July 26 - August 7, 1971. His companions on the flight were Alfred M. Worden (command module pilot) and James B. Irwin (lunar module pilot). Apollo 15 was the fourth crewed lunar landing mission and the first to visit and explore the moon's Hadley Rille and Apennine Mountains which are located on the southeast edge of the Mare Imbrium (Sea of Rains). The lunar module, "Falcon," remained on the lunar surface for 66 hours and 54 minutes (setting a new record for lunar surface stay time) and Scott and Irwin logged 18 hours and 35 minutes each in extravehicular activities conducted during three separate excursions onto the lunar surface. Using "Rover-1" to transport themselves and their equipment along portions of Hadley Rille and the Apennine Mountains, Scott and Irwin performed a selenological inspection and survey of the area and collected 180 pounds of lunar surface materials. They deployed an ALSEP package which involved the emplacement and activation of surface experiments, and their lunar surface activities were televised using a TV camera which was operated remotely by ground controllers stationed in the mission control center located at Houston, Texas. Other Apollo 15 achievements include: largest payloads ever placed into earth and lunar orbits; first scientific instrument module bay flown and operated on an Apollo spacecraft; longest distance traversed on lunar surface; first use of a lunar surface navigation device (mounted on Rover-1); first subsatellite (PFS 1) launched in lunar orbit; and first extravehicular (EVA) from a command module during transearth coast. The latter feat performed by Worden during three excursions to "Endeavour's" SIM-bay where he retrieved film cassettes from the panoramic and mapping cameras and reported his personal observations of the general condition of equipment housed there. Apollo 15 concluded with a Pacific Ocean splashdown and subsequent recovery by the USS OKINAWA.

He has logged 546 hours and 54 minutes in space, of which 20 hours and 46 minutes were in Extravehicular Activity. He is only one of three Astronauts who have flown both earth orbital and lunar Apollo Missions.