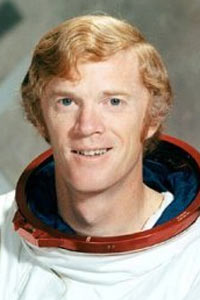 Russell L. (Rusty) Schweickart was born on 25 October 1935 in Neptune, NJ. He is married to Nancy Ramsey of West Hartford, CT. He has seven children and eleven grandchildren. He graduated from Manasquan High School, NJ; received his Bachelor of Science degree in 1956 and his Master of Science degree in 1963, both from the Massachusetts Institute of Technology.

Schweickart was awarded the NASA Distinguished Service Medal (1969) and the Federation Aeronautique Internationale De La Vaux Medal (1970) for his Apollo 9 flight. He also received the National Academy of Television Arts and Sciences Special Trustees Award (Emmy) in 1969 for transmitting the first live TV pictures from space. In 1973 Schweickart was awarded the NASA Exceptional Service Medal for his leadership role in the Skylab rescue efforts.

Schweickart served as a fighter pilot in the U.S. Air Force and the Massachusetts Air National Guard from 1956 to 1963. He has logged over 4000 hours of flight time, including 3500 hours in high performance jet aircraft.

Prior to joining NASA, Schweickart was a research scientist at the Experimental Astronomy Laboratory of the Massachusetts Institute of Technology (MIT). His work at MIT involved research in upper atmospheric physics, star tracking and the stabilization of stellar images. His thesis for a master's degree at MIT was an experimental validation of theoretical models of stratospheric radiance.

Schweickart joined NASA as one of 14 astronauts named in October 1963, the third group of astronauts selected. He served as lunar module pilot for Apollo 9, March 3-13, 1969, logging 241 hours in space. This was the third crewed flight of the Apollo series and the first crewed flight of the lunar module. During a 46 minute EVA Schweickart tested the portable life support backpack which was subsequently used on the lunar surface explorations. On the mission with Schweickart were commander James A. McDivitt and command module pilot David R. Scott.

Schweickart served as backup commander for the first Skylab mission which flew in the Spring of 1973. Following the loss of the thermal shield during the launch of the Skylab vehicle, he assumed responsibility for the development of hardware and procedures associated with erecting the emergency solar shade and deployment of the jammed solar array wing, operations which transformed Skylab from an imminent disaster to a highly successful program.

After the Skylab program, Schweickart went to NASA Headquarters in Washington, DC as Director of User Affairs in the Office of Applications. In this position he was responsible for transferring NASA technology to the outside world and working with technology users to bring an understanding of their needs into NASA.

In 1977 Schweickart joined the staff of Governor Jerry Brown of California, and served in the Governor's office for two years as his assistant for science and technology. In 1979 Schweickart was appointed to the post of Commissioner of Energy for the State of California and served on the Commission for five and a half years. The Commission, which was chaired by Schweickart for three and a half years, was responsible for all aspects of energy regulation in the state other than rate setting, including energy demand forecasting, alternative energy development, powerplant siting and energy performance regulation for appliances and buildings.

In 1987-88, Schweickart chaired the United States Antarctic Program Safety Review Panel for the Director of the National Science Foundation (NSF) in Washington, DC. The resulting report, Safety in Antarctica, a comprehensive on-site review of all U.S. activities in Antarctica, led to a restructuring of the program, increasing the safety of operations in that hazardous environment. At the request of the National Science Foundation, Schweickart also served on the 1997-1998 United States Antarctic Program Outside Review Panel, which reported to the Whitehouse (OSTP) and Congress on the future of US facilities in Antarctica. The US' Amundson-Scott South Pole station has recently been fully rebuilt as a result of this work.

Schweickart is the founder and past president of the Association of Space Explorers (ASE), the international professional society of astronauts and cosmonauts. The organization promotes the cooperative exploration and development of space and the use of space technology for human benefit. The ASE has a current membership of over 300 astronauts and cosmonauts from 29 nations. The Association's first book, The Home Planet, with a preface by Schweickart, was published simultaneously in 10 nations in the Fall of 1988 and was an immediate international best seller.

Schweickart retired from ALOHA Networks, Inc. in 1998 where he served as President and CEO from 1996 through 1998. ALOHA was a data communications company specializing in high performance, wireless internet access equipment.

Schweickart is a retired business and government executive and serves today as Chairman of the Board of the B612 Foundation. The organization, a non-profit private foundation, champions the development and testing of a spaceflight concept to protect the Earth from future asteroid impacts.

His hobbies include golf, bicycling, and hiking.