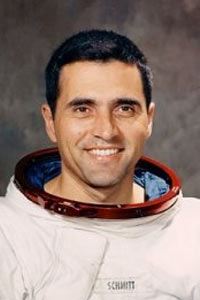 Graduated from Western High School, Silver City, New Mexico; received a bachelor of science degree in science from the California Institute of Technology in 1957; studied at the University of Oslo in Norway during 1957-1958; received doctorate in geology from Harvard University in 1964.

Schmitt was a teaching fellow at Harvard in 1961 where he assisted in teaching a course in ore deposits. Prior to his teaching assignment, he did geological work for the Norwegian Geological Survey on the west coast of Norway, and for the U.S. Geological Survey in New Mexico and Montana. He also worked for two summers as a geologist in southeastern Alaska.

Before joining NASA, he was with the U.S. Geological Survey's Astrogeology Center at Flagstaff, Arizona. He was project chief for lunar field geological methods and participated in photo and telescopic mapping of the Moon, and was among USGS astrogeologists instructing NASA astronauts during their geological field trips.

Dr. Schmitt was selected as a scientist-astronaut by NASA in June 1965. He later completed a 53-week course in flight training at Williams Air Force Base, Arizona. In addition to training for future crewed space flights. He was instrumental in providing Apollo flight crews with detailed instruction in lunar navigation, geology, and feature recognition. Schmitt also assisted in the integration of scientific activities into the Apollo lunar missions and participated in research activities requiring geologic, petrographic, and stratigraphic analyses of samples returned from the moon by Apollo missions.

He was backup lunar module pilot for Apollo 15.

On his first journey into space, Dr. Schmitt occupied the lunar module pilot seat for Apollo 17 -- the last scheduled crewed Apollo mission to the United States -- which commenced at 11:33 p.m. (CST), 6 December 1972, and concluded on 19 December 1972. He was accompanied on the voyage of the command module "America" and the lunar module "Challenger" by Eugene Cernan (spacecraft commander) and Ronald Evans (command module pilot). In maneuvering "Challenger" to a landing at Taurus-Littrow, which is located on the southeast edge of Mare Serenitatis, Schmitt and Cernan activated a base of operations facilitating their completion of three days of exploration. This last Apollo mission to the moon for the United States broke several records set by previous flights and include: longest crewed lunar landing flight (301 hours, 51 minutes); longest lunar surface extravehicular activities (22 hours, 4 minutes); largest lunar sample return (an estimated 115 kg); and longest time in lunar orbit (147 hours, 48 minutes). Apollo 17 ended with a splashdown in the Pacific Ocean approximately 0.4 mile from the target point and 4.3 miles from the prime recovery ship, USS Ticoderoga.

Dr. Schmitt logged 301 hours and 51 minutes in space -- of which 22 hours and 4 minutes were spent in extravehicular activity on the lunar surface.

In July of 1973 Dr. Schmitt was appointed as one of the first Sherman Fairchild Distinguished Scholars at the California Institute of Technology. His appointment was extended to run through July 1975. This appointment ran concurrently with his other activities in NASA.

In February 1974, Schmitt assumed additional duties as Chief of Scientist-Astronauts.

Dr. Schmitt was appointed NASA Assistant Administrator for Energy Programs in May 1974. This office has the responsibility for coordinating NASA support to other Federal Agencies conducting energy research and development and for managing NASA programs applying aeronautics and space technology to the generation, transmission, storage, conservation, utilization and management of energy for terrestrial applications.

In August of 1975, Dr. Schmitt resigned his post with NASA to run for the United States Senate in his home state of New Mexico. He was elected on 2 November 1976, with 57% of the votes cast.

In January 1977, Schmitt began a six-year term as one of New Mexico's Senators in Washington, D.C. His major committee assignments were on the Commerce, Science and Transportation Committee; the Banking, Housing and Urban Affairs Committee and the Select Committee on Ethics. He was the ranking Republican member of the Ethics Committee; of the Science, Technology and Space Subcommittee of Commerce, and the Consumer Sub-committee of Banking.

Since 1982, Schmitt has worked as a consultant, corporate director, and free lance writer and speaker on matters related to space, science, technology, and public policy. In 1994, he was appointed as an Adjunct Professor of Engineering at the University of Wisconsin and Chairman and President of the Annapolis Center for Environmental Quality.