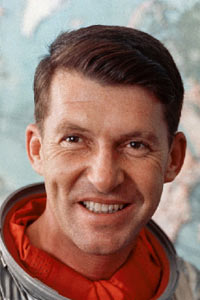 Captain Schirra was one of the seven Mercury Astronauts named by NASA in April 1959. On 3 October 1962; he piloted the six orbit Sigma 7 Mercury flight; a flight which lasted 9 hours, 15 minutes. The spacecraft attained a velocity of 17,557 miles per hour at an altitude of 175 statue miles and traveled almost 144,000 statute miles before re-entry into the earth's atmosphere. Recovery of the Sigma 7 spacecraft occurred in the Pacific Ocean about 275 miles northeast of Midway Island.

Schirra next served as backup command pilot for the Gemini III Mission and on December 15-16, occupied the Command Pilot seat on the history-making Gemini 6 flight. The highlight of this mission was a successful rendezvous of Gemini 6 with the already orbiting Gemini 7 spacecraft, thus, accomplishing the first rendezvous of two crewed maneuverable spacecraft and establishing another space first for the United States. Known as a “text book” pilot, Schirra remained in the spacecraft following his Mercury and Gemini flight and is the first Astronaut to be brought aboard recovery ships twice in this manner. With him on Gemini 6, was Astronaut Thomas P. Stafford.

He was the Command Pilot on Apollo VII, the first crewed flight test of the three direction United States spacecraft. Apollo VII began on 11 October 1968, with Command Module Pilot Donn F. Eisele and Lunar Module Pilot Walter Cunningham. Schirra participated in, and executed, maneuvers enabling crew members to perform exercises in transposition and docking and orbit rendezvous with the S-IVB stage from the Saturn IB launch vehicle. The mission completed eight successful tests and maneuvering ignitions of the service module propulsion engine, measured the accuracy of performance of all spacecraft systems, and provided the first effective television transmission of on-board crew activities. Apollo VII was placed in an orbit with an apogee of 153.5 nautical miles and a perigee of 122.6 nautical miles.

The 260 hour 4.5 million mile shake down flight was concluded on October 22, with splashdown occurring in the Atlantic some 8 miles from the carrier Essex (only 3/10 of a mile from the originally predicted aiming point). Captain Schirra has logged a total of 295 hours and 15 minutes in space. He is unique in that he is the only Astronaut to have flown Mercury, Gemini, and Apollo.