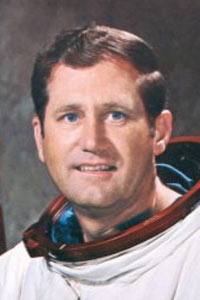 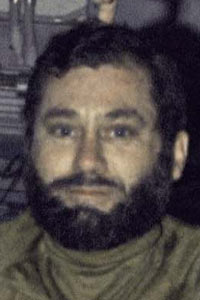 Born 23 January 1930, in Okemah, Oklahoma, and is the son of Mr. and Mrs. Alex W. Pogue who live in Sand Springs, Oklahoma. Married. Three children. He enjoys running and playing paddleball and handball, and his hobbies are gardening and cabinet making.

Pogue, retired Air Force Colonel, came to the Lyndon B. Johnson Space Center from an assignment at Edwards Air Force Base, California, where he had been an instructor at the Air Force Aerospace Research Pilot School since October 1965.

He enlisted in the Air Force in 1951 and received his commission in 1952. While serving with the Fifth Air Force during the Korean conflict, from 1953 to 1954, he completed a combat tour in fighter bombers. From 1955 to 1957, he was a member of the USAF Thunderbirds.

He has gained proficiency in more than 50 types and models of American and British aircraft and is qualified as a civilian flight instructor. Pogue served in the mathematics department as an assistant professor at the USAF Academy in Colorado Springs, Colorado, from 1960 to 1963. In September 1965, he completed a two-year tour as test pilot with the British Ministry of Aviation under the USAF/RAF Exchange Program, after graduating from the Empire Test Pilot's School in Farnborough, England.

Colonel Pogue is one of the 19 Astronauts selected by NASA in April 1966. He served as a member of the astronaut support crews for the Apollo 7, 11, and 14 missions.

Pogue was pilot of Skylab 4 (third and final crewed visit to the Skylab orbital workshop), launched 16 November 1973, and concluded 8 February 1974. This was the longest crewed flight (84 days, 1 hour and 15 minutes) in the history of crewed space exploration to date. Pogue was accompanied on the record setting 34.5-million-mile flight by Gerald P. Carr (commander) and Dr. Edward G. Gibson (science-pilot). They successfully completed 56 experiments, 26 science demonstrations, 15 subsystem detailed objectives, and 13 student investigations during their 1,214 revolutions of the earth.

Pogue is self-employed as a consultant to aerospace and producer of general viewer videos on space flight.