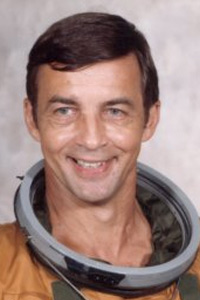 Graduated from Winona City High School, Winona, Mississippi; received a bachelor of science degree from the United States Military Academy at West Point, New York, in 1955, and a master's degree in Nuclear Engineering from the Air Force Institute of Technology, Wright-Patterson Air Force Base, Ohio, in 1962.

Peterson graduated from West Point in 1955. His assignments included four years as a flight instructor and military training officer with the Air Training Command, three years as a nuclear systems analyst with the Air Force Systems Command, and one year as a fighter pilot with Tactical Air Command, including 3 months combat weapons training.

He is a graduate of the Aerospace Research Pilot School. Edwards Air Force Base, California, and was one of the third group of astronauts assigned to the USAF Manned Orbiting Laboratory (MOL) Program.

He has logged over 5,300 hours flying time--including more than 5,000 hours in jet aircraft.

Peterson became a NASA astronaut in September 1969. He served on the astronaut support crew for Apollo 16.

Peterson retired from the United States Air Force with the rank of colonel after having completed more than 24 years of active service, but continued his assignment as a NASA astronaut in a civilian capacity. His areas of responsibility have included engineering support, man/machine interface, and safety assessment.

Peterson was a mission specialist on STS-6, which launched from Kennedy Space Center, Florida, on 4 April 1983. He was accompanied by Mr. Paul J. Weitz (spacecraft commander), Col. Karol J. Bobko (pilot), and Dr. F. Story Musgrave (mission specialist). During this maiden voyage of the spacecraft Challenger, the STS-6 crew conducted numerous experiments in materials processing, recorded lightning activities, deployed the first Tracking and Data Relay Satellite (TDRS-A), and activated three Getaway Specials. Peterson and Musgrave conducted an extravehicular activity (EVA), commonly called a "spacewalk," to test the new suit, the Shuttle airlock, and new tools and techniques for construction and repair outside a spacecraft. After 120 hours of orbital operations STS-6 landed on the concrete runway at Edwards Air Force Base, California, on 9 April 1983. With the completion of this flight Don Peterson has logged 4 hours 15 minutes in extravehicular activity, and a total of 120 hours in space.

Peterson resigned from the Astronaut Office in November 1984, and since that time has worked as a consultant in the area of crewed aerospace operations.