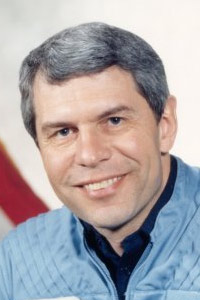 Born in New York City on 14 December 1936, but grew up in Shrewsbury, Massachusetts. Married to the former Judy Woodruff of San Marino, California. Five Children and nine grandchildren.

Attended primary and secondary schools in Shrewsbury, Massachusetts; received a bachelor of arts degree in Astronomy and Physics from Amherst College in 1958, and a doctorate in Astronomy from the California Institute of Technology in 1962.

Prior to his selection for astronaut training, Dr. Parker was an associate professor of astronomy at the University of Wisconsin.

Dr. Parker was selected as a scientist-astronaut by NASA in August 1967. He was a member of the astronaut support crews for the Apollo 15 and 17 missions and served as Program Scientist for the Skylab Program Director's Office during the three crewed Skylab flights. From March 1988 to March 1989 Dr. Parker was stationed at NASA Headquarters in Washington D.C. where he served as Director of the Space Flight/Space Station Integration Office. A veteran of two Spacelab missions, Dr. Parker was a mission specialist on STS-9/Spacelab-1 (Nov 28 to Dec 8, 1983) and on STS-35 (Dec 2-10, 1990) which featured the ASTRO-1 ultraviolet astronomy laboratory. Dr. Parker was the Director of the Division of Policy and Plans for the Office of Space Flight at NASA Headquarters in Washington, D.C. from January 1991 to December 1991. From January 1992 to November 1993 he was Director of the Spacelab and Operations Program. From December 1993 to August 1997 he was Manager of the Space Operations Utilization Program. In August 1997 to August 2005 he served as Director of the NASA Management Office at the Jet Propulsion Laboratory, Pasadena, California.