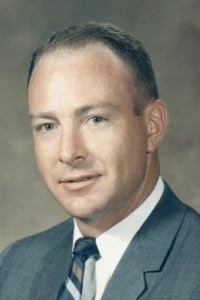 Mitchell's experience includes Navy operational flight, test flight, engineering, engineering management, and experience as a college instructor. Mitchell came to the Manned Spacecraft Center in Houston after graduating first in his class from the Air Force Aerospace Research Pilot School where he was both student and instructor.

He entered the Navy in 1952 and completed his basic training at the San Diego Recruit Depot. In May 1953, after completing instruction at the Officers' Candidate School at Newport, Rhode Island, he was commissioned as an Ensign. He completed flight training in July 1954 at Hutchinson, Kansas, and subsequently was assigned to Patrol Squadron 29 deployed to Okinawa.

From 1957 to 1958, he flew A3 aircraft while assigned to Heavy Attack Squadron Two deployed aboard the USS Bon Homme Richard and USS Ticoderoga; and he was a research project pilot with Air Development Squadron Five until 1959. From 1964 to 1965 he served as Chief, Project Management Division of the Navy Field Office for Manned Orbiting Laboratory (MOL). 1965-1966 was spent at the U.S. Air Force Aerospace Research Pilot School in preparation for astronaut duties, and certification as test pilot. Mitchell served as an instructor in advanced mathematics and navigation theory for astronaut candidates.

On 31 January 1971, serving as lunar module pilot, Dr. Edgar Mitchell, then a U.S. Navy Captain, embarked on a journey through outer space of some 500,000 miles that resulted in becoming the sixth man to walk on the moon. That historic journey terminated safely nine days later on 9 February 1971 and was made in the company of two other men of valor Admiral Alan Shepard and Colonel Stuart Roosa.

In completing his first space flight, Mitchell logged a total of 216 hours and 42 minutes in space.

He was subsequently designated to serve as backup lunar module pilot for Apollo 16.

Dr. Mitchell founded the Institute of Noetic Sciences in 1973, one year after retiring from government service. It is a foundation organized to sponsor research in the nature of consciousness. He also is co founder of the Association of Space Explorers, an international organization founded in 1984 for all who share the experience of space travel. Both are educational organizations developed to provide new understanding of the human condition resulting from the epoch of space exploration.

Dr. Mitchell is author of Psychic Exploration: A Challenge for Science, G.P. Putnam's Sons, 1974, a major reference book; and The Way of the Explorer Putnam 1996. He is also author and/or interviewee in dozens of articles in both professional and popular periodicals.

As a lecturer, Dr. Mitchell delivers 25 to 50 addresses annually on cosmology, human potential and topics relating to the evolving future of the species on planet Earth. His most current lecture series discusses the implications of recent discoveries in science as they affect our individual lives in the home, the workplace and society-at-large. He is a frequent guest on radio and television talk shows and has been featured in several documentary films relative to his interests.

Dr. Mitchell continued to write, speak and do research for a number of new books. He also is a consultant to a limited number of corporations and foundations.