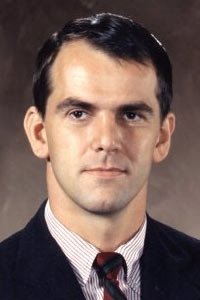 Born 5 June 1934, in La Crosse, Wisconsin. He is married and has a son and a daughter. His hobby is photography, and he enjoys tennis, handball, and baseball.

Graduated from C. K. McClatchey High School, Sacramento, California; received a Bachelor of Science degree with honors in Physics in 1955 and a Doctorate in Physics in 1962, both from the California Institute of Technology.

Michel was a junior engineer with the Firestone Tire and Rubber Company's Guided Missile Division before joining the Air Force in 1955. As an AFROTC graduate, he received flight training at Marana Air Force Base, Arizona, and at Laredo and Perrin Air Force Bases in Texas. During his three years of military service, he flew F-86D Interceptors in the United States and in Europe.

Following his tour of active duty in the Air Force, he was a research fellow at the California Institute of Technology---doing experimental and theoretical work in nuclear physics. He came to Houston in July 1963 and became a member of the faculty at Rice University. His efforts there were directed to researching and teaching space sciences, such as the interaction of solar winds and the lunar atmosphere.

He has accumulated 1,000 hours flying time and 900 hours in jet aircraft.

Dr. Michel was selected as a scientist-astronaut by NASA in June 1965. He resigned in September 1969 to return to teaching and research, and was Department Chairman of the Space Physics and Astronomy Department at Rice University in Houston, Texas, from 1974 to 1979. He has been the Andrew Hays Buchanan Professor of Astrophysics since 1974. He was named a Guggenheim Fellow to the University of Paris, France, from 1979 to 1980, and has been awarded an Alexander von Humboldt, Senior U.S. Scientist Award to study in Heidelberg, from 1982 to 1983.