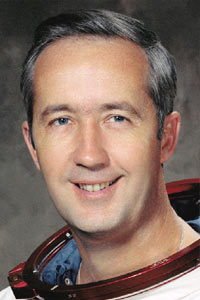 McDivitt joined the Air Force in 1951 and retired with the rank of Brig. General. He flew 145 combat missions during the Korean War in F-80s and F-86s.

He is a graduate of the USAF Experimental Test Pilot School and the USAF Aerospace Research Pilot course and served as an experimental test pilot at Edwards Air Force Base, California.

General McDivitt was selected as an astronaut by NASA in September 1962.

He was command pilot for Gemini 4, a 66-orbit 4-day mission that began on June 3, and ended 7 June 1965. Highlights of the mission included a controlled extra-vehicular activity period and a number of experiments.

He became Manager of Lunar Landing Operations in May 1969, and led a team that planned the lunar exploration program and redesigned the spacecraft to accomplish this task. In August 1969, he became Manager of the Apollo Spacecraft Program and was the program manger for Apollo 12, 13, 14, 15 and 16.

He retired from the USAF and left NASA in June 1972, to take the position of Executive Vice-President, Corporate Affairs for Consumers Power Company. In March 1975, he joined Pullman, Inc. as Executive Vice-President and a Director. In October 1975 he became President of the Pullman Standard Division, The Railcar Division, and later had additional responsibility for the leasing and engineering and construction areas of the company. In January 1981 he joined Rockwell International where he is presently Senior Vice President, Government Operations and Rockwell International Corporation, Washington, D.C.