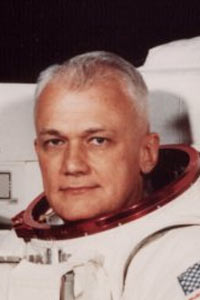 McCandless was graduated second in a class of 899 from Annapolis and subsequently received flight training from the Naval Aviation Training Command at bases in Pensacola, Florida, and Kingsville, Texas. He was designated a naval aviator in March of 1960 and proceeded to Key West, Florida, for weapons system and carrier landing training in the F-6A Skyray. He was assigned to Fighter Squadron 102 (VF-102) from December 1960 to February 1964, flying the Skyray and the F-4B Phantom II, and he saw duty aboard the USS Forrestal (CVA-59) and the USS Enterprise (CVA(N)-65), including the latter's participation in the Cuban blockade. For three months in early 1964, he was an instrument flight instructor in Attack Squadron 43 (VA-43) at the Naval Air Station, Apollo Soucek Field, Oceana, Virginia, and then reported to the Naval Reserve Officer's Training Corps Unit at Stanford University for graduate studies in electrical engineering.

McCandless is one of the 19 astronauts selected by NASA in April 1966. He was a member of the astronaut support crew for the Apollo 14 mission and was backup pilot for the first crewed Skylab mission (SL-1/SL-2). He was a co-investigator on the M-509 astronaut maneuvering unit experiment which was flown in the Skylab Program, and collaborated on the development of the Manned Maneuvering Unit (MMU) used during Shuttle EVAs. He has been responsible for crew inputs to the development of hardware and procedures for the Inertial Upper Stage (IUS), Space Telescope, the Solar Maximum Repair Mission, and the Space Station Program.

STS-31 Discovery, launched on 24 April 1990, from the Kennedy Space Center in Florida. The crew aboard Space Shuttle Discovery included Col. Loren J. Shriver, USAF, (spacecraft commander), Col. Charles F. Bolden, USMC, (pilot), and Dr's. Steven A Hawley, and Dr. Kathryn D. Sullivan (mission specialists). During this 5 day mission, the crew deployed the Hubble Space Telescope, and conducted a variety of middeck experiments involving the study of protein crystal growth, polymer membrane processing, and the effects of weightlessness and magnetic fields on an ion arc. They also operated a variety of cameras, including both the IMAX in cabin and cargo bay cameras, for Earth observations from their record setting altitude of 380 miles. Following 76 orbits of the earth in 121 hours, STS-31 Discovery landed at Edwards Air Force Base, California, on 29 April 1990.