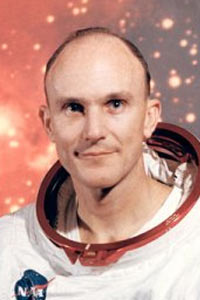 Attended Florida elementary and secondary schools and is a graduate of Miami Edison High School, Miami, Florida; received a bachelor of science degree in Aeronautical Engineering from Auburn University in 1958.

Prior to reporting for duty at the Lyndon B. Johnson Space Center, he was a student at the Air Force Aerospace Research Pilot School.

Mattingly began his Naval career as an Ensign in 1958 and received his wings in 1960. He was then assigned to VA-35 and flew A1H aircraft aboard the USS Saratoga from 1960 to 1963. In July 1963, he served in VAH-11 deployed aboard the USS Franklin D. Roosevelt where he flew the A3B aircraft for two years.

Mattingly is one of the 19 astronauts selected by NASA in April 1966.

He served as a member of the astronaut support crews for the Apollo 8 and 11 missions and was the astronaut representative in development and testing of the Apollo spacesuit and backpack (EMU).

He was designated command module pilot for the Apollo 13 flight but was removed from flight status 72 hours prior to the scheduled launch due to exposure to the German measles.

From January 1973 to March 1978, Mattingly worked as head of astronaut office support to the STS (Shuttle Transportation System) program. He was next assigned as technical assistant for flight test to the Manager of the Orbital Flight Test Program. From December 1979 to April 1981, he headed the astronaut office ascent/entry group. He subsequently served as backup commander for STS-2 and STS-3, Columbia's second and third orbital test flights. From June 1983 through May 1984, Mattingly served as Head of the Astronaut Office DOD Support Group.

Captain Mattingly resigned from NASA in 1985.

Apollo 16 (April 16-27, 1972) was the fifth crewed lunar landing mission. The crew included John W. Young (spacecraft commander), Ken Mattingly (command module pilot), and Charles M. Duke, Jr. (lunar module pilot). The mission assigned to Apollo 16 was to collect samples from the lunar highlands at a location near the crater Descartes. While in lunar orbit the scientific instruments aboard the command and service module "Casper" extended the photographic and geochemical mapping of a belt around the lunar equator. Twenty-six separate scientific experiments were conducted both in lunar orbit and during cislunar coast. Major emphasis was placed on using man as an orbital observer capitalizing on the human eye's unique capabilities and man's inherent curiosity. Although the mission of Apollo 16 was terminated one day early, due to concern over several spacecraft malfunctions, all major objectives were accomplished through the ceaseless efforts of the mission support team and were made possible by the most rigorous preflight planning yet associated with an Apollo mission.

STS-4, the fourth and final orbital test flight of the Shuttle Columbia, launched from Kennedy Space Center, Florida, on June 27,1982. Mattingly was the spacecraft commander and Henry W. Hartsfield, Jr., was the pilot. This 7-day mission was designed to: further verify ascent and entry phases of shuttle missions; perform continued studies of the effects of long-term thermal extremes on the Orbiter subsystems; and conduct a survey of Orbiter-induced contamination on the Orbiter payload bay. Additionally, the crew operated several scientific experiments located in the Orbiter's cabin and in the payload bay. These experiments included the Continuous Flow Electrophoresis System experiment designed to investigate the separation of biological materials in a fluid according to their surface electrical charge. This experiment was a pathfinder for the first commercial venture to capitalize on the unique characteristics of space. The crew is also credited with effecting an in-flight repair which enabled them to activate the first operational "Getaway Special" (composed of nine experiments that ranged from algae and duckweed growth in space to fruit fly and brine shrimp genetic studies). STS-4 completed 112 orbits of the Earth before landing on a concrete runway at Edwards Air Force Base, California, on 4 July 1982.