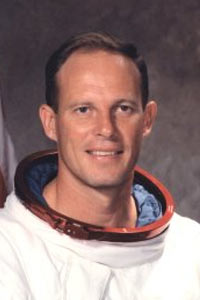 Born 29 February 1936, in Grand Rapids, Michigan. Lousma and his wife, Gratia Kay, have been married since 1956. They have four children and six grandchildren. He is a golfing enthusiast and enjoys hunting, fishing, and aviation.

Fellow of the American Astronautical Society; member of the Society of the Sigma Xi, the University of Michigan "M" Club, the Officer's Christian Fellowship, and the Association of Space Explorers.

Lousma was a reconnaissance pilot with VMCJ-2, 2nd Marine Air Wing, at Cherry Point, North Carolina, before being assigned to Houston and the Lyndon B. Johnson Space Center. He became a Marine Corps officer in 1959 and received his wings in 1960 after completing training at the U.S. Naval Air Training Command. He was then assigned to VMA-224, 2nd Marine Air Wing, as an attack pilot and later served with VMA-224, 1st Marine Air Wing, at Iwakuni, Japan. He has logged 7000 hours of flight time--including 700 hours in general aviation aircraft and 1619 hours in space, 4,500 hours in jet aircraft, 240 hours in helicopters, and 700 hours in general aviation aircraft.

Lousma is one of the 19 astronauts selected by NASA in April 1966. He served as a member of the astronaut support crews for the Apollo 9, 10, and 13 missions. He was the pilot for Skylab-3 (July 28 to 25 September 1973) and was spacecraft commander on STS-3 (March 22-30, 1982), logging a total of over 1,619 hours in space. Lousma also spent 11 hours on two spacewalks outside the Skylab space station. He also served as backup docking module pilot of the United States flight crew for the Apollo-Soyuz Test Project (ASTP) mission which was completed successfully in July 1975.

Skylab-3 (SL-3) (July 28 to 25 September 1973). The crew on this 59-1/2 day flight included Alan L. Bean (spacecraft commander), Jack Lousma (pilot), and Owen K. Garriott (science-pilot). SL-3 accomplished 150% of mission goals while completing 858 revolutions of the earth and traveling some 24,400,000 miles in earth orbit. The crew installed six replacement rate gyros used for attitude control of the spacecraft and a twin-pole sun-shade used for thermal control, and they repaired nine major experiment or operational equipment items. They devoted 305 man hours to extensive solar observations from above the earth's atmosphere, which included viewing two major solar flares and numerous smaller flares and coronal transients. Also acquired and returned to earth were 16,000 photographs and 18 miles of magnetic tape documenting earth resources observations. The crew completed 333 medical experiment performances and obtained valuable data on the effects of extended weightlessness on humans. Skylab-3 ended with a Pacific Ocean splashdown and recovery by the USS New Orleans.

STS-3, the third orbital test flight of space shuttle Columbia, launched from the Kennedy Space Center, Florida, on 22 March 1982, into a 180-mile circular orbit above the earth. Jack Lousma was the spacecraft commander and C. Gordon Fullerton was the pilot on this 8-day mission. Major flight test objectives included exposing the Columbia to extremes in thermal stress and the first use of the 50-foot remote manipulator system (RMS) to grapple and maneuver a payload in space. The crew also operated several scientific experiments in the orbiter's cabin and on the OSS-1 pallet in the payload bay. Space Shuttle Columbia responded favorably to the thermal tests and was found to be better than expected as a scientific platform. The crew accomplished almost 100% of the objectives assigned to STS-3, and after a 1-day delay due to bad weather, landed on the lakebed at White Sands, New Mexico, on March 30,1982, having traveled 3.4 million miles during 129.9 orbits of the earth. Mission duration was 192 hours, 4 minutes, 49 seconds.