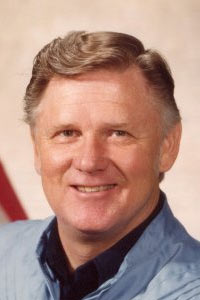 Born in Midvale, Utah, on 18 May 1930. Married to the former Kathleen Maughan of Logan, Utah. They have seven grown children. Recreational interests include amateur theatricals, play writing, and painting; and he is a swimmer and skier.

Attended Midvale Elementary School and is a graduate of Jordan High School, Sandy, Utah; received a bachelor of science degree with high honors in Physics from the University of Utah in 1953 and a doctor of Philosophy degree in High Energy Nuclear Physics in 1964 from the University of California, Berkeley; performed post-doctoral study at the Geophysical Institute, University of Alaska, in 1975-1976.

Member of the American Geophysical Union, American Association for Advancement of Science, and Phi Kappa Phi.

Before his selection as an astronaut, he worked at the NASA Goddard Space Flight Center as a space physicist. He had been with Goddard since 1964 and was involved in experiments to determine the nature and properties of low-energy particles within the Earth's magnetosphere and interplanetary space. Previous to this, he worked at the Lawrence Radiation Laboratory, Berkeley, California, doing research in pion-nucleon scattering, a type of basic high energy particle interaction.

Lind holds the rank of Commander in the U.S. Naval Reserve. He served four years on active duty with the Navy at San Diego and later aboard the carrier USS Hancock. He received his wings in 1957.

Dr. Lind was selected as an astronaut in April 1966.

He served as backup science-pilot for Skylab 3 and Skylab 4 (the second and third crewed Skylab missions) and as a member of the rescue crew for the Skylab missions.