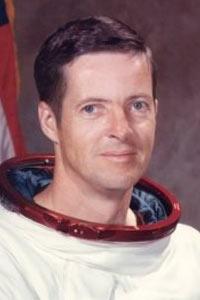 Born 19 February 1932, in Oak Park, Illinois. Married to the former Shirley Ann Good of Danville, Pennsylvania. They have three daughters, and three grandchildren. His hobbies are reading and classical music.

Graduated from Fenwick High School, Oak Park, Illinois, in 1949; received a bachelor of arts degree in Philosophy from College of the Holy Cross, Worcester, Massachusetts, in 1953; a doctor of Medicine degree from Northwestern University Medical School, Chicago, Illinois, in 1957; completed internship at the District of Columbia General Hospital in Washington, D.C.; and attended the U.S. Navy School of Aviation Medicine at Pensacola, Florida, being designated a naval flight surgeon in December 1958.

Fellow of the Aerospace Medical Association; member of the Aircraft Owners and Pilots Association.

Kerwin, a Captain, has been in the Navy Medical Corps since July 1958. He earned his wings at Beeville, Texas, in 1962.

Captain Kerwin was selected as a scientist-astronaut by NASA in June 1965.

Kerwin served as science-pilot for the Skylab 2 (SL-2) mission which launched on May 25 and terminated on 22 June 1973. With him for the initial activation and 28-day flight qualification operations of the Skylab orbital workshop were Charles Conrad, Jr., (spacecraft commander) and Paul J. Weitz (pilot).

Kerwin was subsequently in charge of the on-orbit branch of the Astronaut Office, where he coordinated astronaut activity involving rendezvous, satellite deployment and retrieval, and other Shuttle payload operations.

From 1982-1983, Kerwin served as the National Aeronautics and Space Administration's senior science representative in Australia. In this capacity, he served as liaison between NASA's Office of Space Tracking and Data Systems and Australia's Department of Science and Technology.

From 1984-1987, he served as Director, Space and Life Sciences, Johnson Space Center. Kerwin was responsible for direction and coordination of medical support to operational crewed spacecraft programs, including health care and maintenance of the astronauts and their families; for direction of life services, supporting research and light experiment project; and for managing JSC earth sciences and scientific efforts in lunar and planetary research.

He retired from the Navy, left NASA and joined Lockheed in 1987.

At Lockheed he managed the Extravehicular Systems Project, providing hardware for Space Station Freedom, from 1988 to 1990; with two other Lockheed employees he invented the Simplified Aid for EVA Rescue (SAFER), recently tested for use by space walking astronauts on the International Space Station (ISS). He then served on the Assured Crew Return Vehicle team, and served as Study Manager on the Human Transportation Study, a NASA review of future space transportation architectures. In 1994-95 he led the Houston liaison group for Lockheed Martin's FGB contract, the procurement of the Russian "space tug" which has become the first element of the ISS. He served on the NASA Advisory Council from 1990 to 1993.

He joined Systems Research Laboratories (SRL) in June, 1996, to serve as Program Manager of the SRL team which bid to win the Medical Support and Integration Contract at the Johnson Space Center. The incumbent, KRUG Life Sciences, was selected. Then, to his surprise, KRUG recruited him to replace its retiring President, T. Wayne Holt. He joined KRUG on 1 April 1997.

In addition to his duties at Wyle, he serves on the Board of Directors of the National Space Biomedical Research Institute (NSBRI) as an Industry representative.