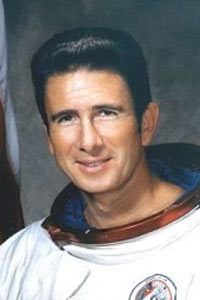 Born 17 March 1930, in Pittsburgh, Pennsylvania. Died 8 August 1991 of a heart attack. He is survived by his wife Mary Ellen and their five children.

Member of the Air Force Association and the Society of Experimental Test Pilots.

Irwin, an Air Force Colonel, was commissioned in the Air Force upon graduation from the Naval Academy in 1951. He received his flight training at Hondo Air Base and Reese Air Force Base, Texas.

During his military career, he accumulated more than 7,015 hours flying time, 5,300 hours in jet aircraft.

Colonel Irwin was one of the 19 astronauts selected by NASA in April 1966. He was crew commander of lunar module (LTA-8)-this vehicle finished the first series of thermal vacuum tests on 1 June 1968. He also served as a member of the astronaut support crew for Apollo 10 and as backup lunar module pilot for the Apollo 12 flight.

Irwin served as lunar module pilot for Apollo, July 26 to 7 August 1971. His companions on the flight were David R. Scott, spacecraft commander and Alfred M. Worden, command module pilot. Apollo 15 was the fourth crewed lunar landing mission and the first to visit and explore the moon's Hadley Rille and Apennine Mountains which are located on the southeast edge of the Mare Imbrium (Sea of Rains). The lunar module, "Falcon", remained on the lunar surface for 66 hours, 54 minutes-setting a new record for lunar surface stay time-and Scott and Irwin logged 18 hours and 35 minutes each in extravehicular activities conducted during three separate excursions onto the lunar surface. Using "Rover-l" to transport themselves and their equipment along portions of Hadley Rille and the Apinnine Mountains, Scott and Irwin performed a selenological inspection and survey of the area and collected approximately 180 pounds of lunar surface materials. They deployed an ALSEP package which involved the emplacement and activation of surface experiments, and their lunar surface activities were televised in color using a TV camera which was operated remotely by ground controllers stationed in the mission control center located at Houston, Texas. Other Apollo 15 achievements included: largest payloads ever placed in earth and lunar orbits; first scientific instrument module bay flown and operated on an Apollo spacecraft; longest distance traversed on lunar surface; first use of a lunar surface navigation device, mounted on Rover 1; first subsatellite (PFS 1) launched in lunar orbit; and first extravehicular activity (EVA) from a command module during transearth coast. The latter feat was accomplished by Worden during three excursions to "Endeavour's" SIM bay where he retrieved film cassettes from the panoramic and mapping cameras and reported his personal observations of the general condition of equipment housed there.

Apollo 15 concluded with a Pacific splashdown and subsequent recovery by the USS OKINAWA.

In completing his first flight, Irwin logged 295 hours and 11 minutes in space-19 hours and 46 minutes of which were in EVA.

Colonel Irwin resigned from NASA and the Air Force in July 1972, to form a religious organization, High Flight Foundation, in Colorado Springs, Colorado.