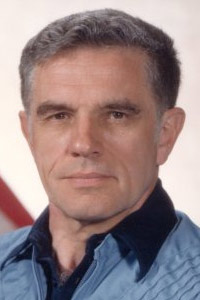 Born on 17 October 1926, in Cincinnati, Ohio. Died 5 October 1993. He is survived by his wife, Caroline, and four children. His hobbies included home computers, stamp collecting, and astronomy; and he also enjoyed racquet ball, baseball, skin diving, and mountain climbing.

Henize was an observer for the University of Michigan Observatory from 1948 to 1951, stationed at the Lamont-Hussey Observatory in Bloemfontein, Union of South Africa. While there he conducted an objective-prism spectroscopic survey of the southern sky for stars and nebulae showing emission lines of hydrogen.

In 1954 he became a Carnegie post-doctoral fellow at the Mount Wilson Observatory in Pasadena, California, and conducted spectroscopic and photometric studies of emission-line stars and nebulae. From 1956 to 1959 he served as a senior astronomer at the Smithsonian Astrophysical Observatory. He was in charge of photographic satellite tracking stations for the satellite tracking program and responsible for the establishment and operation of a global network of 12 stations for photographic tracking of artificial earth satellites.

Dr. Henize was appointed associate professor in Northwestern University's Department of Astronomy in 1959 and was awarded a professorship in 1964. In addition to teaching, he conducted research on planetary nebulae, peculiar emission-line stars, S-stars, and T-associations. During 1961 and 1962, he was a guest observer at Mt. Stromlo Observatory in Canberra, Australia, where he used instruments ranging from the Uppsala 20/26-inch schmidt to the 74-inch parabolic reflector.

Henize also engaged in studies of ultraviolet optical systems and astronomical programs suited to the crewed space flight program. He became principal investigator of experiment S-013 which obtained ultraviolet stellar spectra during the Gemini 10, 11, and 12 flights. He also became principal investigator of experiment S-019 in which a 6-inch aperture objective-prism spectrograph was used on Skylab to obtain ultraviolet spectra of faint stars.

From 1974 to 1978 Dr. Henize chaired the NASA Facility Definition Team for STARLAB, a proposed 1-meter UV telescope for Spacelab. From 1978 to 1980 he chaired the NASA Working Group for the Spacelab Wide-Angle Telescope. Since 1979 he has been the chairman of the International Astronomical Union Working Group for Space Schmidt Surveys and continues to be one of the leaders in proposing the use of a 1-meter all-reflecting Schmidt telescope to carry out a deep full-sky survey in far-ultraviolet wavelengths.

He authored and/or co-authored 70 scientific publications dealing with astronomy research.

Dr. Henize was selected as a scientist-astronaut by NASA in August 1967. He completed the initial academic training and the 53-week jet pilot training program at Vance Air Force Base, Oklahoma. He was a member of the astronaut support crew for the Apollo 15 mission and for the Skylab 2, 3, and 4 missions. He was mission specialist for the ASSESS-2 spacelab simulation mission in 1977. He has logged 2,300 hours flying time in jet aircraft.

This mission was the first pallet-only Spacelab mission and the first mission to operate the Spacelab Instrument Pointing System (IPS). It carried 13 major experiments of which 7 were in the field of astronomy and solar physics, 3 were for studies of the Earth's ionosphere, 2 were life science experiments, and 1 studied the properties of superfluid helium. Dr. Henize's responsibilities included testing and operating the IPS, operating the Remote Manipulator System (RMS), maintaining the Spacelab systems, and operating several of the experiments.

After 126 orbits of the earth, STS 51-F Challenger landed at Edwards Air Force Base, California, on 6 August 1985. With the completion of this flight Henize logged 188 hours in space.

In 1986 he accepted a position as senior scientist in the Space Sciences Branch.

Dr. Henize died 5 October 1993 of respiratory and heart failure during a climb of Mount Everest.