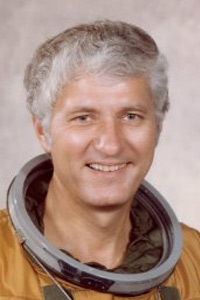 Born in Birmingham, Alabama, on 21 November 1933. Married to the former Judy Frances Massey of Princeton, North Carolina. They have two grown daughters.

Hartsfield received his commission through the Reserve Officer Training Program (ROTC) at Auburn University. He entered the Air Force in 1955, and his assignments have included a tour with the 53rd Tactical Fighter Squadron in Bitburg, Germany. He is also a graduate of the USAF Test Pilot School at Edwards Air Force Base, California, and was an instructor there prior to his assignment in 1966 to the USAF Manned Orbiting Laboratory (MOL) Program as an astronaut. After cancellation of the MOL Program in June 1969, he was reassigned to NASA.

Hartsfield retired in August 1977 from the United States Air Force with more than 22 years of active service but continues his assignment as a NASA astronaut in a civilian capacity. He was a member of the orbital flight test missions group of the astronaut office and was responsible for supporting the development of the Space Shuttle entry flight control system and its associated interfaces.

In 1989, he accepted a temporary assignment in the Office of Space Flight, NASA Headquarters, Washington, D.C. There he served as Director of the Technical Integration and Analysis Division reporting directly to the Associate Administrator for Space Flight. In this assignment he was responsible for facilitating the integration of the Space Station and its unique requirements into the Space Shuttle systems. His office also served as a technical forum for resolving technical and programmatic issues.

In 1991, Mr. Hartsfield accepted the position of the Man-Tended Capability (MTC) Phase Manager, Space Station Freedom Program and Operations (SSFPO), with a duty station at the Johnson Space Center. Reporting directly to the Deputy Director, SSFPO, he represented the Deputy Director in providing appropriate program guidance and direction to the Space Shuttle Program, and across the Space Station Freedom Program for all MTC phase mission unique activities to assure appropriate resolution of issues.

In September 1996, the scope of Mr. Hartsfield's work was expanded to include independent assessment of the programs and projects of the Human Exploration and Development of Space (HEDS) Enterprise and he was named Director, HEDS Independent Assurance.

STS-4, the fourth and final orbital test flight of the Shuttle Columbia, launched from Kennedy Space Center, Florida, on 27 June 1982. He accompanied Thomas K. Mattingly (spacecraft commander) on this seven-day mission designed to: further verify ascent and entry phases of Shuttle missions; perform continued studies of the effects of long-term thermal extremes on the Orbiter subsystems; and conduct a survey of Orbiter-induced contamination on the Orbiter payload bay. Additionally, the crew operated several scientific experiments located in the Orbiter's cabin as well as in the payload bay. These experiments included the Continuous Flow Electrophoresis System (CFES), designed to investigate the separation of biological materials in a fluid according to their surface electrical charge. The crew was credited with effecting an in-flight repair which enabled them to activate the first operational "Getaway Special" which was comprised of nine experiments that ranged from algae and duckweed growth in space, to fruit fly and brine shrimp genetic studies. STS-4 completed 112 orbits of the Earth before landing on a concrete runway at Edwards Air Force Base, California, on 4 July 1982. Mission duration was 169 hours 11 minutes, 11 seconds.