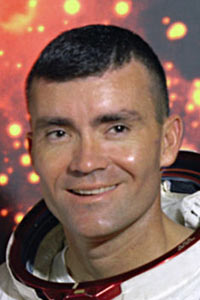 Graduated from Biloxi High School, Biloxi, Mississippi; attended Perkinston Junior College (Association of Arts); received a bachelor of science degree with honors in Aeronautical Engineering from the University of Oklahoma in 1959, an honorary doctorate of science from Western Michigan University of 1970, and attended Harvard Business School, PMD Class 24 in 1972.

Haise was a research pilot at the NASA Flight Research Center at Edwards, California, before coming to Houston and the Lyndon B. Johnson Space Center; and from September 1959 to March 1963, he was a research pilot at the NASA Lewis Research Center in Cleveland, Ohio. During this time he authored the following papers which have been published: a NASA TND, entitled "An Evaluation of the Flying Qualities of 7 General-Aviation Aircraft"; NASA TND 3380, "Use of Aircraft for Zero Gravity Environment, May 1966"; SAE Business Aircraft Conference Paper, entitled "An Evaluation of General-Aviation Aircraft Flying Qualities, March 30-1 April 1966"; and a paper delivered at the Tenth Symposium of the Society of Experimental Test Pilots, entitled "A Quantitative/Qualitative Handling Qualities Evaluation of 7 General-Aviation Aircraft, 1966."

He was the Aerospace Research Pilot School's outstanding graduate of Class 64A and served with the U.S. Air Force from October 1961 to August 1962 as a tactical fighter pilot and as chief of the 164th Standardization-Evaluation Flight of the 164th Tactical Fighter Squadron at Mansfield, Ohio. From March 1957 to September 1959, Haise was a fighter interceptor pilot with the 185th Fighter Interceptor Squadron in the Oklahoma Air National Guard.

He also served as a tactics and all weather flight instructor in the U.S. Navy Advanced Training Command at NAAS Kingsville, Texas, and was assigned as a U. S. Marine Corps fighter pilot to VMF-533 and 114 at MCAS Cherry Point, North Carolina, from March 1954 to September 1956.

His military career began in October 1952 as a Naval Aviation Cadet at the Naval Air Station in Pensacola, Florida.

Haise has accumulated 9,300 hours flying time, including 6,200 hours in jets.

Mr. Haise was one of the 19 astronauts selected by NASA in April 1966. He served as backup lunar module pilot for the Apollo 8 and 11 missions, and backup spacecraft commander for the Apollo 16 mission.

From April 1973 to January 1976, he was technical assistant to the Manager of the Space Shuttle Orbiter Project. He was commander of one of the two 2-man crews who piloted space shuttle approach and landing test (ALT) flights during the period June through October 1977. This series of critical orbiter flight tests involved initially Boeing 747/orbiter captive-active flights, followed by air-launched, unpowered glide, approach, and landing tests (free flights). There were 3 captive mated tests with the orbiter "Enterprise" carried atop the Boeing 747 carrier aircraft, allowing inflight low-altitude and low-speed test and checkout of flight control systems and orbiter controls, and 5 free flights which permitted extensive evaluations of the orbiter's subsonic flying qualities and performance characteristics during separation, up and away flight, flare, landing, and rollout--providing valuable real-time data duplicating the last few minutes of an operational shuttle mission.

Haise was lunar module pilot for Apollo 13, April 11-17, 1970. Apollo 13 was scheduled for a ten-day mission for the first landing in the hilly, upland Fra Mauro region of the moon. The original flight plan, however, was modified en route to the moon due to a failure of the service module cryogenic oxygen system which occurred at approximately 55 hours into the flight. Haise and fellow crewmen, James A. Lovell (spacecraft commander) and John L. Swigert (command module pilot), working closely with Houston ground controllers, converted their lunar module "Aquarius" into an effective lifeboat. Their emergency activation and operation of lunar module systems conserved both electrical power and water in sufficient supply to assure their safety and survival while in space and for the return to earth.