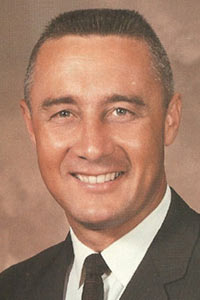 Born 3 April 1926, in Mitchell., Indiana. Died 27 January 1967, at NASA Kennedy Space Center, Florida, in the Apollo spacecraft fire. He is survived by his wife Betty and their two children.

Member of the Society of Experimental Test Pilots.

Grissom, an Air Force Lieutenant Colonel, received his wings in March 1951. He flew 100 combat missions in Korea in F-86s with the 334th Fighter Interceptor Squadron and, upon returning to the United States in 1952, became a jet instructor at Bryan, Texas.

Grissom was one of the seven Mercury astronauts selected by NASA in April 1959. He piloted the Liberty Bell 7 spacecraft -- the second and final suborbital Mercury test flight -- on 21 July 1961. This flight lasted 15 minutes and 37seconds, attained an altitude of 118 statute miles, and traveled 302 miles downrange from the launch pad at Cape Kennedy.

Grissom was named to serve as command pilot for the AS-204 mission, the first 3-man Apollo flight