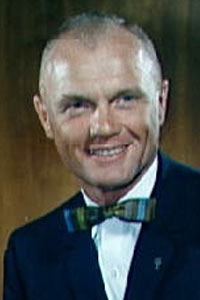 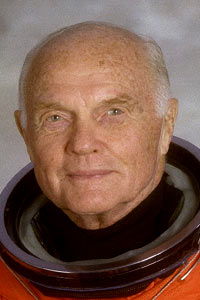 Born 18 July 1921 in Cambridge, Ohio. Married to the former Anna Margaret Castor of New Concord, Ohio. They have two grown children and two grandchildren. John Glenn passed away on 8 December 2016 at the age of 95.

He entered the Naval Aviation Cadet Program in March 1942 and was graduated from this program and commissioned in the Marine Corps in 1943. After advanced training, he joined Marine Fighter Squadron 155 and spent a year flying F-4U fighters in the Marshall Islands.

During his World War II service, he flew 59 combat missions. After the war, he was a member of Marine Fighter Squadron 218 on the North China patrol and served on Guam. From June 1948 to December 1950 Glenn was an instructor in advanced flight training at Corpus Christi, Texas. He then attended Amphibious Warfare Training at Quantico, Virginia. In Korea he flew 63 missions with Marine Fighter Squadron 311. As an exchange pilot with the Air Force Glenn flew 27 missions in the in F-86 Sabrejet. In the last nine days of fighting in Korea Glenn downed three MIG's in combat along the Yalu River.

After Korea, Glenn attended Test Pilot School at the Naval Air Test Center, Patuxent River, Maryland. After graduation, he was project officer on a number of aircraft. He was assigned to the Fighter Design Branch of the Navy Bureau of Aeronautics (now Bureau of Naval Weapons) in Washington from November 1956 to April 1959, during which time he also attended the University of Maryland.

In July 1957, while project officer of the F8U Crusader, he set a transcontinental speed record from Los Angeles to New York, spanning the country in 3 hours and 23 minutes. This was the first transcontinental flight to average supersonic speed. Glenn has nearly 9,000 hours of flying time, with approximately 3,000 hours in jet aircraft.

Glenn was assigned to the NASA Space Task Group at Langley Research Center, Hampton, Virginia, in April 1959 after his selection as a Project Mercury Astronaut. The Space Task Group was moved to Houston and became part of the NASA Manned Spacecraft Center in 1962. Glenn flew on Mercury-6 (20 February 1962) and STS-95 (October 29 to 7 November 1998), and has logged over 218 hours in space. Prior to his first flight, Glenn had served as backup pilot for Astronauts Shepard and Grissom. When astronauts were given special assignments to ensure pilot input into the design and development of spacecraft, Glenn specialized in cockpit layout and control functioning, including some of the early designs for the Apollo Project. Glenn resigned from the Manned Spacecraft Center on 16 January 1964. He was promoted to the rank of Colonel in October 1964 and retired from the Marine Corps on 1 January 1965. He was a business executive from 1965 until his election to the United States Senate in November 1974. Glenn retired from the U.S. Senate in January 1999.

On 20 February 1962, Glenn piloted the Mercury-Atlas 6 "Friendship 7" spacecraft on the first crewed orbital mission of the United States. Launched from Kennedy Space Center, Florida, he completed a successful three-orbit mission around the earth, reaching a maximum altitude (apogee) of approximately 162 statute miles and an orbital velocity of approximately 17,500 miles per hour. Glenn's "Friendship 7" Mercury spacecraft landed approximately 800 miles southeast of KSC in the vicinity of Grand Turk Island. Mission duration from launch to impact was 4 hours, 55 minutes, and 23 seconds.

STS-95 Discovery (October 29 to 7 November 1998) was a 9-day mission during which the crew supported a variety of research payloads including deployment of the Spartan solar-observing spacecraft, the Hubble Space Telescope Orbital Systems Test Platform, and investigations on space flight and the aging process. The mission was accomplished in 134 Earth orbits, traveling 3.6 million miles in 213 hours and 44 minutes.