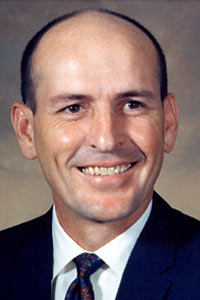 Born 5 January 1930, in Quanah, Texas. Died 6 June 1967, near Houston, Texas, in an automobile accident. He is survived by his wife Ada and two children.

Graduated from Quanah High School, Quanah, Texas; received a Bachelor of Science degree in Naval Sciences from the U. S. Naval Academy in 1952.

Awarded the "Outstanding Graduate Certificate" from the U. S. Naval Academy in 1952.

Givens, an Air Force Major, was commissioned in the Air Force upon graduating from Annapolis in 1952 and received his flight training as a student pilot at the United States Air Force Air Training Command. In 1954, he was a flight commander and fighter pilot with the 35th Fighter Interceptor Group on duty in Japan. He served as an instructor at the Air Force Interceptor Weapons School from January 1956 to March 1958 and subsequently attended the United States Air Force Experimental Flight Test Pilot School at Edwards Air Force Base, California. Upon graduation he became an instructor in the Stability and Control Section.

His next assignment took him to the Naval Air Station, Point Mugu, California, where he was a project pilot with Air Development Squadron 4. While there, he not only conducted operational evaluations but also was responsible for compiling and developing the operation procedures and tactics for fleet operation of the F8U-2N.

He served as Assistant to the Commandant at the USAF Experimental Flight Test Pilot School from November 1961 to September 1962 and then attended the USAF Aerospace Research Pilot School, from which he graduated in 1963. When informed of his selection for astronaut training, he was assigned as Project Officer with USAF SSD Detachment 2 at the Manned Spacecraft Center.

Major Givens was one of the 19 astronauts selected by NASA in April 1966.