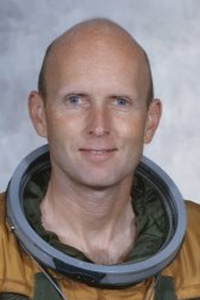 Fullerton, who logged 382 hours in space flight, was a NASA astronaut from September 1969 until November 1986 when he joined the Flight Crew Branch at Dryden. In July 1988, he completed a 30-year career with the U.S. Air Force and retired in the rank of colonel.

As the project pilot on the NASA B-52 launch aircraft, Fullerton flew during the first six air launches of the commercially developed Pegasus space vehicle. He was involved in a series of development air launches of the X-38 Crew Recovery Vehicle and in the Pegasus launches for the X-43A Hyper-X advanced propulsion project.

Fullerton had been involved in numerous other research programs at Dryden. He was the project pilot on the Propulsion Controlled Aircraft program, during which he successfully landed both a modified F-15 and an MD-11 transport with all control surfaces neutralized, using only engine thrust modulation for control.

Assigned to evaluate the flying qualities of the Russian Tu-144 supersonic transport during two flights in 1998, he reached a speed of Mach 2 and became one of only two non-Russian pilots to fly that aircraft.

He led a project that utilized a Convair 990 modified to test space shuttle landing gear components during many very high-speed landings.

Other projects for which he had flown in the past included the C-140 JetStar Laminar Flow Control; F-111 Mission Adaptive Wing; F-14 Variable Sweep Flow Transition; Space Shuttle drag chute and F-111 crew module parachute tests with the B-52; X-29 vortex flow control; and the F-18 Systems Research Aircraft.

Fullerton graduated from U.S. Grant High School, Portland, Oregon. He earned Bachelor of Science and Master of Science in mechanical engineering from the California Institute of Technology, Pasadena, California., in 1957 and 1958, respectively.

Fullerton entered the U. S. Air Force in July 1958 after working as a mechanical design engineer in the Flight Test Department of Hughes Aircraft Co., Culver City, California.

After flight school, he was trained as an F-86 interceptor pilot, and later became a B-47 bomber pilot at Davis-Monthan Air Force Base, Tucson, Arizona. In 1964 he was selected to attend the Air Force Aerospace Research Pilot School (now the Air Force Test Pilot School), Edwards Air Force Base, California. Upon graduation he was assigned as a test pilot with the Bomber Operations Division at Wright-Patterson Air Force Base, Dayton, Ohio. Fullerton served as a flight crewmember for the Air Force Manned Orbiting Laboratory (MOL) program from 1966 through 1969.

After assignment as an astronaut to the NASA Johnson Space Center, Houston, Fullerton served on the support crews for the Apollo 14, 15, 16, and 17 lunar missions. In 1977, Fullerton was assigned to one of the two flight crews that piloted the Space Shuttle prototype Enterprise during the Approach and Landing Test Program at Dryden.

Fullerton was the pilot on the eight-day STS-3 Space Shuttle orbital flight test mission March 22-30, 1982. The mission exposed the orbiter Columbia to extremes in thermal stress and tested the 50-foot Remote Manipulator System used to grapple and maneuver payloads in orbit. STS-3 landed at White Sands, New Mexico, because Rogers Dry Lake at Edwards was wet due to heavy seasonal rains.

Fullerton was commander of the STS-51F Spacelab 2 mission, launched on 29 July 1985. This mission, with the orbiter Challenger, was the first pallet-only Spacelab mission and the first to operate the Spacelab Instrument Pointing System (IPS). It carried 13 major experiments in the fields of astronomy, solar physics, ionospheric science, life science, and materiel science (a super fluid helium experiment). T he mission ended 6 August 1985, with a landing at Dryden.

In December 2007 C. Gordon Fullerton retired from NASA and his post of Associate Director of Flight Operations at NASA's Dryden Flight Research Center, Edwards, California. His assignments included a variety of flight research and support activities piloting the 747 Shuttle Carrier Aircraft (SCA) and other multi-engine and high performance aircraft.