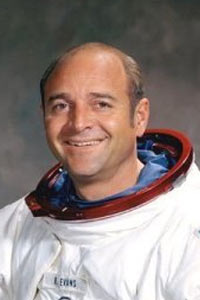 When notified of his selection to the astronaut program, Evans was on sea duty in the Pacific-assigned to VF51 and flying F8 aircraft from the carrier USS Ticoderoga during a period of seven months in Viet Nam combat operation.

He was a combat flight instructor (F8 aircraft) with VF-124 from January 1961 to June 1962 and, prior to this assignment, participated in two WESTPAC aircraft carrier cruises while a pilot with VF-142. In June 1957, he completed flight training after receiving his commission as an Ensign through the Navy ROTC Program at the University of Kansas.

Total flight time accrued during his career is 5,100 hours, including 4,600 hours in jet aircraft.

Captain Evans was one of the 19 astronauts selected by NASA in April 1966. He served as a member of the astronaut support crews for the Apollo 7 and Apollo 11 flights and as backup command module pilot for Apollo 14.

On his first journey into space, Captain Evans occupied the command module pilot seat for Apollo 17 which commenced at 11:33 p.m. (CST), 6 December 1972, and concluded on 19 December 1972-the last scheduled crewed mission to the moon for the United States. He was accompanied on this voyage of the command module "America" and the lunar module "Challenger" by Eugene Cernan, spacecraft commander, and Harrison H. (Jack) Schmitt (lunar module pilot). While Cernan and Schmitt completed their explorations of the Taurus-Littrow landing area down on the lunar surface, Evans maintained a solo vigil in lunar orbit aboard the "America", completing assigned work tasks which required visual geological observations, hand-held photography of specific targets, and the control of cameras and other highly sophisticated scientific equipment carried in the command module SIM-bay. Evans later completed a 1-hour, 6-minute extravehicular activity during the transearth coast phase of the return flight, successfully retrieving three camera cassettes and completing a personal inspection of the equipment bay area. This last mission to the moon for the United States broke several records set by previous flights which include: longest crewed lunar landing flight, 3 01 hours, 51 minutes; longest lunar surface extravehicular activities, 22 hours, 4 minutes; largest lunar sample return, an estimated 115 kg, 249 lbs.; and longest time in lunar orbit, 147 hours, 48 minutes. Apollo 17 ended with a splashdown in the Pacific Ocean approximately 0.4 mile from the target point and 4.3 miles from the prime recovery ship, the USS Ticoderoga.

Completing his first space flight, Captain Evans logged 301 hours, 51 minutes in space-1 hour, 6 minutes of which were spent in extravehicular activity. He holds the record of more time in lunar orbit than anyone else in the world.

Evans retired from the United States Navy on 30 April 1976, with 21 years of service, and remained active as a NASA astronaut involved in the development of NASA's Space Shuttle Program. He served as a member of the operations and training group, within the astronaut office, responsible for launch and ascent phases of the Shuttle flight program.

Evans retired from NASA in March 1977 to become a coal industry executive.