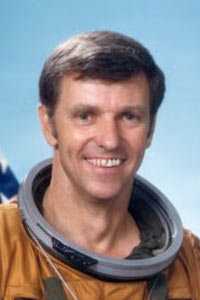 Attended primary and secondary schools in Chapman Kansas, and is a graduate of Dickinson County High School; received a bachelor of science degree in Aeronautical Engineering from the University of Kansas in 1955.

Member of the Society of Experimental Test Pilots (SETP).

Engle received his commission in the Air Force through the AFROTC Program at the University of Kansas and entered flying school in 1957. He served with the 474th Fighter Day Squadron and the 309th Tactical Fighter Squadron at George Air Force Base, California. He is a graduate of the USAF Experimental Test Pilot School and the Air Force Aerospace Research Pilot School. - more - Engle was a test pilot in the X-15 research program at Edwards Air Force Base, California, from June 1963 until his assignment to the Lyndon B. Johnson Space Center. Three of his 16 flights in the X-15 exceeded an altitude of 50 miles (the altitude that qualifies a pilot for astronaut rating). Prior to that time, he was a test pilot in the Fighter Test Group at Edwards.

He has flown over 155 different types of aircraft during his career (25 different fighters), logging more than 12,400 hours flight time--9,000 in jet aircraft.

Engle was one of the 19 astronauts selected by NASA in April 1966.

He was back-up lunar module pilot for the Apollo 14 mission.

He served as Deputy Associate Administrator for Manned Space Flight at NASA Headquarters from March 1982 to December 1982. He retained his flight astronaut status and returned to the Johnson Space Center in January 1983.

Joe Engle retired from the United States Air Force on 30 November 1986. On December 1, 1986 he was appointed to the Kansas Air National Guard and subsequently promoted to the rank of Brigadier General. He is currently an Aerospace and Sporting Goods Consultant, and continues an active flying career in high performance aircraft.

STS-2 (November 12-14, 1981), the second orbital test flight of the Space Shuttle Columbia, was launched from Kennedy Space Center, Florida. Engle's pilot for this flight was Dick Truly. Despite a mission shortened from 5 days to 2 days because of a failed fuel cell, the crew accomplished more than 90% of the objectives set for STS-2 before returning to a landing on the dry lakebed at Edwards Air Force Base, California. Major test objectives included the first tests in space of the 50-foot remote manipulator arm. Also, twenty-nine flight test maneuvers were performed during the entry profile at speeds from Mach 24 (18,500 mph) to subsonic. These maneuvers were designed to extract aerodynamic and aerothermodynamic data during hypersonic entry into the Earth's atmosphere. Mission duration was 36 earth orbits in 54 hours, 13 minutes, 12 seconds.