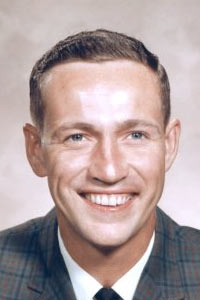 Born in Columbus, Ohio, on 23 June 1930. Died on 2 December 1987 of a heart attack while on a business trip to Tokyo, Japan. He is survived by his wife Susan and their two children. Colonel Eisele had four children from a previous marriage.

Eisele graduated from the United States Naval Academy and chose a career in the Air Force. He is also a graduate of the Air Force Aerospace Research Pilot School at Edwards Air Force Base, California.

Eisele was one of the third group of astronauts selected by NASA in October 1963.

On 11 October 1968, he occupied the command module pilot seat for the eleven-day flight of Apollo VII–the first crewed flight test of the third generation United States spacecraft. With spacecraft commander Walter M. Schirra, Jr., and lunar module pilot Walter Cunningham, Eisele participated in and executed maneuvers enabling the crew to perform exercises in transposition and docking and lunar orbit rendezvous with the S-IVB stage of their Saturn IB launch vehicle; completed eight successful test and maneuvering ignitions of the service module propulsion engine; measured the accuracy of performance of all spacecraft systems; and provided the first effective television transmissions of onboard crew activities.

Apollo VII was placed in an earth-orbit with an apogee of 153.5 nautical miles and perigee of 122.6 nautical miles; and the 260-hour, four-and-a-half million mile shakedown flight was successfully concluded on 22 October 1968, with splashdown occurring in the Atlantic, some eight miles from the carrier ESSEX (only three-tenths of a mile from the originally predicted aiming point).

He served as backup command module pilot for the Apollo X flight.

In July 1972, Colonel Eisele retired from the Air Force and left the space program to become Director of the U.S. Peace Corps in Thailand. Upon Returning from Thailand, Eisele became Sales Manager for Marion Power Shovel Company, a division of Dresser Industries. Eisele handled private and corporate accounts for the investment firm of Oppenheimer & Company.