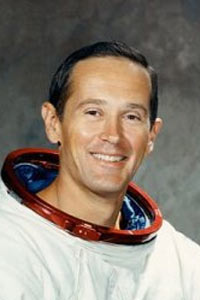 Attended Lancaster High School in Lancaster, South Carolina, and was graduated valedictorian from the Admiral Farragut Academy in St. Petersburg, Florida; received a bachelor of science degree in Naval Sciences from the U.S. Naval Academy in 1957 and a master of science degree in Aeronautics from the Massachusetts Institute of Technology in 1964; presented an honorary doctorate of philosophy from the University of South Carolina in 1973, and an honorary doctorate of Humanities from Francis Marion College in 1990.

Awarded the NASA Distinguished Service Medal, the JSC Certificate of Commendation (1970), the Air Force Distinguished Service Medal with Oak Leaf Cluster and AF Legion of Merit, and Air Force Command Pilot Astronaut Wings, the SETP Iven C. Kincheloe Award of 1972, the AAS Flight Achievement Award for 1972, the AIAA Haley Astronautics Award for 1973, and the Federation Aeronautique Internationale V.M. Komarov Diploma in 1973; named South Carolina Man of the Year in 1973 and inducted into the South Carolina Hall of Fame in 1973; and presented the Boy Scouts of America Distinguished Eagle Scout Award in 1975.

Duke was one of the 19 astronauts selected by NASA in April 1966. He served as member of the astronaut support crew for the Apollo 10 flight. He was CAPCOM for Apollo 11, the first landing on the Moon and he served as backup lunar module pilot on Apollo 13.

Duke served as lunar module pilot of Apollo 16, April 16-27, 1972. He was accompanied on the fifth crewed lunar landing mission by John W. Young (spacecraft commander) and Thomas K. Mattingly II (command module pilot). Apollo 16 was the first scientific expedition to inspect, survey, and sample materials and surface features in the Descartes region of the rugged lunar highlands. Duke and Young commenced their record setting lunar surface stay of 71 hours and 14 minutes by maneuvering the lunar module "Orion" to a landing on the rough Cayley Plains. In three subsequent excursions onto the lunar surface, they each logged 20 hours and 15 minutes in extravehicular activities involving the emplacement and activation of scientific equipment and experiments, the collection of nearly 213 pounds of rock and soil samples, and the evaluation and use of Rover-2 over the roughest and blockiest surface yet encountered on the moon.

Other Apollo 16 achievements included the largest payload placed in lunar orbit (76, 109 pounds); first cosmic ray detector deployed on lunar surface; first lunar observatory with the far UV camera; and longest in-flight EVA from a command module during transearth coast (1 hour and 13 minutes). The latter feat was accomplished by Mattingly when he ventured out to "Casper's" SIM-bay for the retrieval of vital film cassettes from the panoramic and mapping cameras. Apollo 16 concluded with a Pacific Ocean splashdown and subsequent recovery by the USS Ticoderoga.

With the completion of his first space flight, Duke has logged 265 hours in space and over 21 hours of extra vehicular activity.

In December 1975, Duke retired from the Astronaut program to enter private business. He is owner of Duke Investments, and is President of Charlie Duke Enterprises. He is an active speaker and Christian lay witness and President of Duke Ministry For Christ.